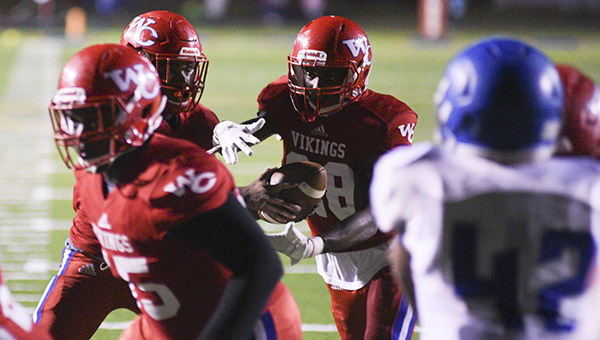 The autumn air was crisp on Friday night.

Warren Central was not.

The Vikings scored enough points that the outcome was never in doubt against Murrah, but didn’t do a lot more. They managed only 151 yards of total offense, had seven first downs in the game, and turned it over twice while muddling their way to a 12-0 victory.

“We just looked sloppy. I thought the defense played well. I thought the special teams looked good. It was very frustrating offensively,” Warren Central coach Josh Morgan said. “When we got on the same page, we’d fumble the ball or drop passes. We definitely weren’t in sync on that part.”

The win kept Warren Central (5-3, 3-1 Region 2-6A) in a three-way tie for second place in Region 2-6A, but was hardly the kind of thing Morgan wanted to see heading into an extremely difficult stretch of the schedule.

Warren Central will go on the road next week to face Clinton, and then finishes the regular season against No. 2 Starkville and at No. 3 South Panola.

“There’s goods and bads. Right now we’re sitting in a good spot. But if we don’t play better, it doesn’t matter where we’re sitting. We’re not going to go very far. That’s what we all have to realize, and have a lot better performance to beat these next three teams,” Morgan said.

After Murrah (1-7, 0-4) went three-and-out on the game’s opening possession, punter LaDarrian McMullen was unable to handle a low snap and the ball got away from him. Warren Central wound up falling on it at the 5-yard line, leading to a touchdown run by Malik Sims on the next play.

Later in the first half, a high snap sailed over McMullen’s head and through the back of the end zone for a safety. WC also blocked a punt.

“Our punt block unit has been really good this year. We went after them and continued to go after them, and tried to find a way to win. They did a good job executing and putting a lot of pressure on them. That helped us out,” Morgan said.

The Vikings added a 37-yard field goal by Joshua Griffin in the final minute of the first quarter and led 12-0 at halftime. The defense made it feel like a 50-point lead — Murrah finished the game with 96 total yards and committed five turnovers — but the Vikings’ offense continually wasted opportunities.

The blocked punt in the first quarter resulted in a blocked 40-yard field goal attempt by Griffin. A turnover on Murrah’s next play gave WC the ball at the 21-yard line, but the Vikings fumbled at the 6.

In all, Warren Central had four drives advance inside Murrah’s 25-yard line that resulted in no points. In one maddening sequence in the fourth quarter, it ran eight plays from inside the 11 on consecutive possessions and did not score.

Warren Central finished with 130 rushing yards, led by Kentrick Thompson with 55 on 15 carries. Quarterback Parker Kivett was just 6-of-13 passing for 21 yards.

“It was just all over the place. You just can’t play like that,” Morgan said.
The one bright spot for Warren Central was its defense. Marvin Freeman had an interception, a sack and a forced fumble, and the Vikings sacked Murrah quarterback Zack Ormond three times in all.

Murrah only ran four plays in Warren Central territory in the first half and did not get inside the 30-yard line at any point in the game.

“It was from what happened last week. We felt like it was the defense’s fault, as a team,” Freeman said, referring to a 28-7 loss to Madison Central. “We had to do our thing and put in the work. We couldn’t make any more mistakes — not in practice, not out here. We couldn’t bust any more assignments, and that’s what we focused on and what we did.”