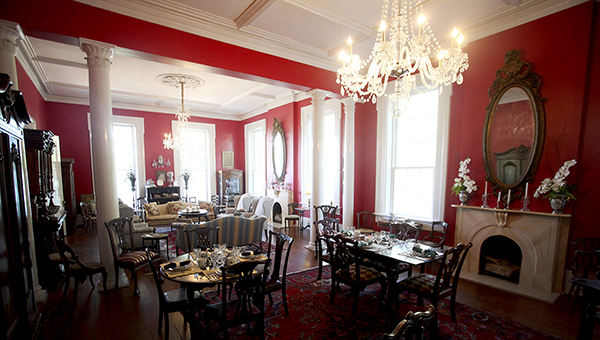 The ballroom at the Duff Green Mansion.

There is story after story and sightings and sightings of ghosts at the Duff Green Mansion. The only problem is the mansion’s current owner is skeptical.

Therefore, in an effort to convince Duff Green homeowner Harley Caldwell her home and iconic Vicksburg bed and breakfast is haunted, Grant Wilson and the cast of Ghost Hunters paid a visit to the mansion.

The results of their findings will be aired Wednesday at 8 p.m. on the A&E channel.

“Harry Sharp, who was the former owner, asked the team to make an investigation in order to convince me the house is haunted,” Caldwell said. “His fear was that I would eventually encounter ghosts and be frightened away from the mansion.”

The visit by the ghost hunters was shrouded in secrecy, Caldwell said, to keep fans away and allow the team to make a proper investigation.

Throughout the investigation, Caldwell said, she contended ghosts do not exist in the Duff Green.

In addition to searching for paranormal activity in the home, members of the Sharp family were interviewed including their 14-year-old granddaughter, Lydia Nettles.

When Nettles was 4, she walked into the home’s ballroom and is believed to have seen Annie Lake Green, the young daughter of the Greens who died from yellow fever.

This sighting is only one of many paranormal accounts the Sharp family experienced during their more than 30 years of living in the home.

Caldwell said the results of the investigation would be revealed during Wednesday’s broadcast.