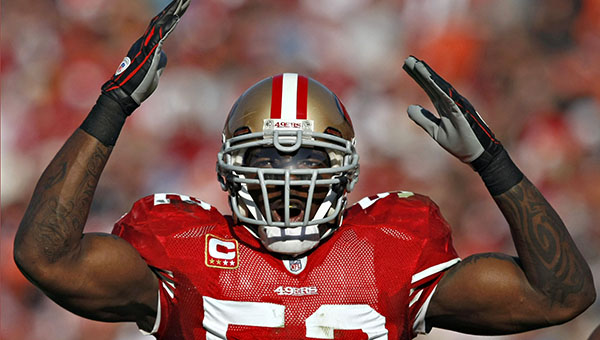 Patrick Willis (52) celebrates during a 2009 game with the San Frnacisco 49ers. The former Ole Miss star was among six Mississippi sports legends elected to the Mississippi Sports Hall of Fame on Monday. (The Associated Press)

Now he’s got one more Hall of Fame to add to his resumé.

The former Ole Miss linebacker was one of six people elected to the Mississippi Sports Hall of Fame’s Class of 2020, the museum announced Monday.

The Class of 2020 will be inducted at a ceremony on Aug. 1 at the Jackson Convention Complex. Next year’s class brings the Hall’s membership to 322.

Willis was a first-team All-American and a two-time Southeastern Conference Defensive Player of the Year at Ole Miss from 2003-06. He was selected in the first round of the 2007 NFL Draft by the San Francisco 49ers and made seven Pro Bowls in eight seasons. He led the NFL in tackles twice and helped the 49ers reach Super Bowl XLVII.

He was inducted into the Ole Miss Sports Hall of Fame in 2015, and elected to the College Football Hall of Fame in January. The induction ceremony for the latter is in December.

While Willis, a Tennessee native, came to Mississippi and became a college sports star, McDyess took the opposite route. The Quitman native played at Alabama and was the second overall selection in the 1995 NBA Draft.

The power forward played 15 seasons in the NBA and averaged 12.0 points and 7.5 rebounds per game during his career. He was an NBA All-Star in 2001 and won a gold medal at the 2000 Olympics.

Boatner is the winningest baseball coach in Mississippi history. He won 1,202 games and 14 state championships during a 50-year career. He spent 45 seasons at West Lauderdale High School, where he also won 19 slow-pitch softball state championships.
Boatner is now a member of seven state or national halls of fame.

Brown was born in Port Gibson but grew up in Jackson. He became the second African-American golfer to earn a PGA Tour card and the first to win a Tour event.

Smith, a Jackson native, currently works for the Los Angeles Dodgers but has had a hand in designing a number of stadiums and arenas across the United States. She was the chief architect on the project that transformed Atlanta’s Olympic Stadium into Turner Field, and has worked on renovations to Baltimore’s Camden Yards, Boston’s Fenway Park and others.

Templeton was born and raised in Starkville, and served as Mississippi State’s athletic director from 1987 to 2008. During his tenure he oversaw renovations to most of the school’s major athletics facilities, the addition of women’s soccer and softball as varsity sports, and hired the SEC’s first African-American football head coach in Sylvester Croom.

Templeton was inducted into the Mississippi State Sports Hall of Fame in 2018.