Four Down Territory: WC’s punt team has an eventful night, no unbeatens left in Class 6A, and Maher makes NFL history 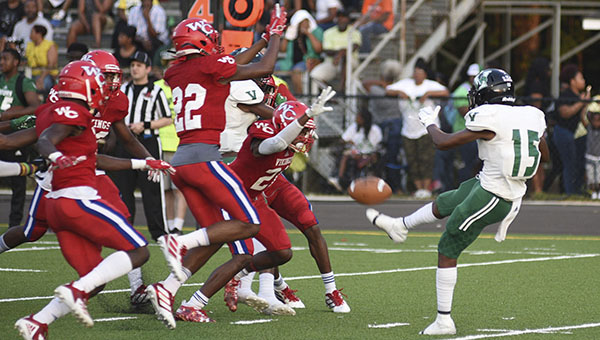 You’re in Four Down Territory. Each week we’ll highlight four notes, stats and trends from the week that was in Mississippi high school football, college football and the NFL.

Warren Central has certainly had better performances than in Friday’s sluggish 12-0 win over Murrah, but its special teams had quite an eventful night.

The Vikings took advantage of two bad punt snaps to score nine points, blocked another punt, had one field goal blocked, made another, and even had an unusual penalty — all in the first half.

The zaniness started on the opening series, when Murrah punter LaDarrian McMullen was unable to handle a low snap. The ball got past him and resulted in a 25-yard loss, setting up a 5-yard touchdown run by WC’s Malik Sims on the next play.

Later in the first half, a snap sailed high over McMullen’s head and out of the end zone for a safety.

“Our punt block unit has been really good this year. We went after them and continued to go after them and tried to find a way to win,” Warren Central coach Josh Morgan said. “We did a good job executing and putting a lot of pressure on them. That helped us out.”

Not every special teams play was a good one, however.

After a blocked punt — Warren Central’s third of the season — gave the Vikings the ball at Murrah’s 40-yard line, Josh Griffin had a 40-yard field goal try blocked.

On Murrah’s next series, a high snap almost led to another block but McMullen was able to get the kick away. Demond Patton initially called for a fair catch around the 45-yard line, then ran up to catch the ball at the 35 and started to run. That a penalty and pushed the start of the ensuing drive back near midfield.

The Vikings did recover from that miscue to score on a 37-yard field by Griffin, meaning all of their points in the game were directly scored on or influenced by special teams plays.

McMullen punted twice in the second half without incident.

For the first time in nearly two years, there are no undefeated teams in MHSAA Class 6A.

Starkville’s 24-21 win over Madison Central on Friday made the Jaguars the last Class 6A team to suffer a loss this season.

Pearl and Horn Lake went undefeated en route to state championships in 2017 and 2018, meaning the last time there was not an undefeated Class 6A team at some point in the season was the week of Nov. 18, 2016, when a 12-0 Tupelo team lost to Madison Central in the second round of the playoffs.

Memphis running back Kenneth Gainwell had a historic night in the Tigers’ 47-17 win over Tulane on Saturday.

The redshirt freshman from Yazoo City carried the ball 18 times for 104 yards and a touchdown, and caught nine passes for 203 yards and two TDs. He is the first player in Memphis history, and the first in the Football Bowl Subdivision in 22 years, to have 200 receiving yards and 100 rushing yards in the same game.

The last player to accomplish the feat was Louisiana Tech wide receiver Troy Edwards in 1997.

Gainwell was also the first Memphis player to amass 300 all-purpose yards without having a punt or kickoff return.

“I was just trying to put my best out there,” Gainwell said after the game. “I don’t know what to say. I’m in shock right now.”

4
Dallas Cowboys kicker Brett Maher got into the NFL record book on the final play of the first half Sunday night against Philadelphia.

Maher bombed a 63-yard field goal to become the first player in NFL history to kick three field goals of 60 yards or longer in his career.

Maher kicked a 62-yarder the previous week against the New York Jets, and another 62-yarder last season against Philadelphia. Only two other players, the Oakland Raiders’ Sebastian Janikowski and the Los Angeles Rams’ Greg Zuerlein, have kicked two field goals longer than 60 yards.

Maher, who is only in his second season, also made a 59-yarder last season against Tampa Bay. He is 9-for-12 in his brief career on field goals of 50 yards or longer.

“You just try to control it as much as you can and find that fine line from back there,” Maher told DallasCowboys.com after the game. “You don’t know when you’re going to get those opportunities, so it’s nice to take advantage of them.”

Maher’s kick on Sunday was the 22nd in NFL history from longer than 60 yards, and 144 kicks from that distance have been attempted. The longest field goal ever made was a 64-yarder by then-Denver Broncos kicker Matt Prater in 2013.

Maher tied New Orleans Saints kicker Tom Dempsey — the first to make one from longer than 60 — Denver’s Jason Elam, San Francisco’s David Akers, Carolina’s Graham Gano and Janikowski in the group that has hit from 63 yards.

Maher’s 63-yarder set an NFL record for longest field goal in an indoor stadium. His 62-yarder last season was the previous record.