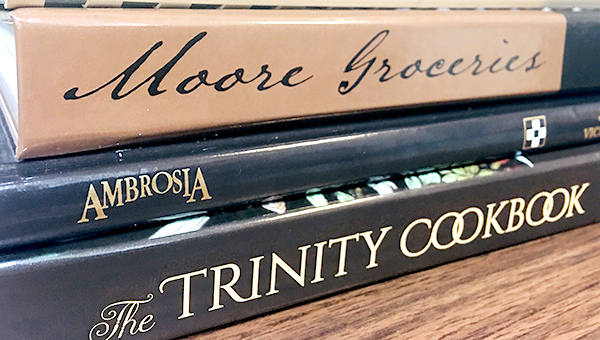 In the months I’ve been in Vicksburg, a couple of things stand out as absolute.

One is Vicksburg is a town of good cooks and even better cookbooks.

One of the first cookbooks I got my hands on was The Trinity Cookbook: Our Story of Feeling Body, Mind & Spirit. A friend and Trinity church member gave it to me after we had lunch one day at Mainstreet Market. She surprised me with the beautiful book and a visit to the church after our meal to see what has come to be one of my favorite tourist attractions in Vicksburg: the Tiffany windows in the sanctuary.

The book has one of those windows on the cover and is filled with history, vibrant photos and of course, good recipes.

The second cookbook I’ve gotten my hands on is Ambrosia: A Deep South Mixture of Homes, Recipes & History. This cookbook is organized a little differently than most. Instead of your normal categories of appetizers, entrees, sides and dessert, Ambrosia is organized first by the seasons, and then by parties or events held during those seasons.

The book takes you through a dessert course perfect for serving after a showing of Gold in the Hills in the spring, a spread for the Miss Mississippi Pageant Party in the summer, a Pilgrimage Tour Guides’ Brunch in the fall and an 1862 Christmas Re-enactment during the winter.

Perhaps the most impressive thing about Ambrosia is the photography, spreads and staging throughout the book. Those who put the book together created photography sets that rival those done by popular magazines Southern Living and Garden & Gun. They are just as beautiful and precise as one would expect to see in The White House.

A third and most recent find is Moore Groceries, a publication from The Old Courthouse Museum that is filled with J. Mack Moore’s photographs of Vicksburg people, buildings and boats.

A second thing I’ve learned is that in Vicksburg, good cookbooks sell quickly.

There are two I’ve heard about but can’t get my hands on. One is called Vintage Vicksburg, another publication from The Junior Auxillary of Vicksburg, and the other is the cookbook from Anchuca. Fortunately, I’ve found a friend who is willing to let me borrow her Vintage Vicksburg.

As for the Anchuca cookbook, I’ll have to wait to get my hands on it until the restaurant and inn publish another one, which I hope comes sooner rather than later.

Catherine Boone Hadaway is the publisher of The Vicksburg Post. She can be reached at catherine.hadaway@vicksburgpost.com.