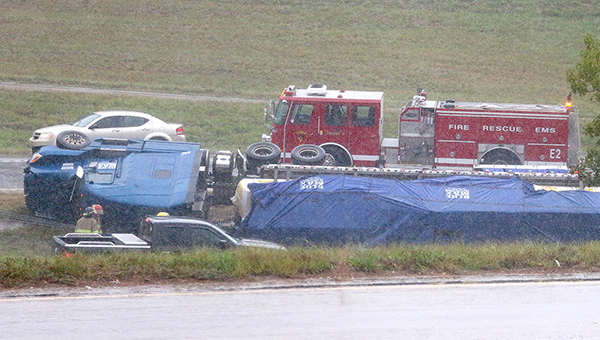 Rain slick roads contributed to a series of wrecks Monday on Interstate 20 beginning about 1 p.m. and ending about 3 a.m. when the highway was cleared from the last wreck.

Sgt. Bobby Jones, supervisor of the Vicksburg Police Department’s traffic division, said a total of seven wrecks occurred during the eight-hour period and all in the westbound lane of I-20, beginning with an 18-wheeler overturning near the Indiana Avenue/I-20 entrance.

“The semi hydroplaned and went off into the highway median and overturned,” Jones said. “And with the traffic slowed down, there were four individual MVCs (wrecks) on I-20 at the East Clay off ramp. There were minor injuries in one MVC and they were taken to (Merit Health) River Region and treated and released.”

One of the wrecks near East Clay Street involved an 18-wheeler that swerved to the right side of the highway to avoid another semi, sideswiping the other truck’s trailer and became stuck on the shoulder. When the driver tried to get off the shoulder, his truck jackknifed.

At about 8:30 p.m., Jones said officers worked a four-car wreck near the East Clay exit.

“We were just getting ready to open the interstate up and traffic slowed, and a 2009 Yukon and rear-ended a Toyota Corolla, and started a chain reaction with two other vehicles,” he said.

About 10 p.m., after the four-car wreck was cleared, Jones said an 18-wheeler collided with a pickup, went into to the median by McDonald’s and overturned. The occupants involved in that wreck received minor injuries, he said.

Halloween can be scary for children with food allergies