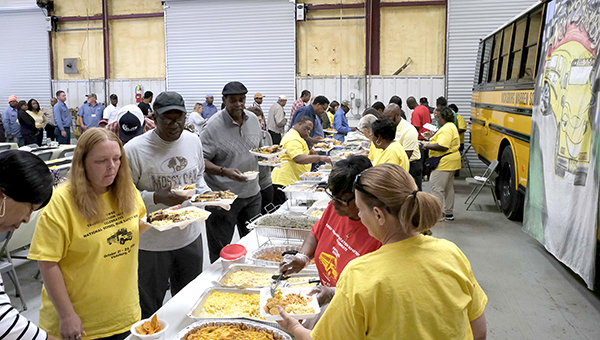 “The bus drivers join together and have a luncheon and invite officials to come out and fellowship with them and thank them for what they do to help them,” Jonathon Tillman, assistant school district transportation director, said. He said the lunch has been held for about six years.

The weeklong observance also emphasizes school bus safety. The lunch featured demonstrations on the proper way to unload and load buses, and how to deal with unruly children.

“We just want the community to look out for the black and yellow — the buses that transport our kids,” Tillman said. “We want our drivers to be aware that the children are precious cargo. You can replace packages on a truck but you can’t replace a child.”

Lucille Forman, a bus driver for 19 years and president of the local chapter of the Professional School Bus Drivers Association, said the meal is funded by the drivers and through donations from the community.

She said Friday bus drivers will form a convoy of buses from the bus barn on Mississippi 27 to Sherman Avenue. The buses will be escorted by police, deputies and Mississippi Highway Patrol troopers.

Forman said “90 percent” of the drivers she encounters on the road follow the safety rules regarding school buses “90 percent of the time.”

“We are slow-moving vehicles and they think they can pass us, but we can’t stop as fast as they can stop,” she said, adding she loves her job. “I love the children, I’ve got a great supervisor, and the people I work for are so nice.”

Doris Carter, a bus monitor for 10 years, was frying fish for the meal.

“This is a lovely thing, recognizing the bus drivers and the whole department,” she said.

Brenda Brown, a retired driver, was at the bus barn helping with the luncheon.

“I just come out here and support it,” she said. “It gives us a chance to do things; to come out and be as one. And our No. 1 goal is safety.”