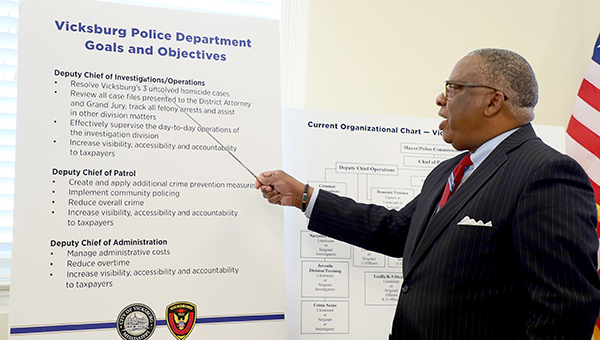 The major change is the elevation of the patrol division supervisor to deputy chief of patrol. The mayor said no one is being replaced, adding Deputy Chief Bobby Stewart will remain chief of operations and Deputy Chief Eric Paymon will remain over the department’s administration.

Flaggs said he prepared the reorganization of the department on his own without outside assistance and without consulting Aldermen Michael Mayfield and Alex Monsour or Police Chief Milton Moore.

He said Mayfield and Monsour received copies of the plan Wednesday and were expected to vote on the proposed restructuring during Friday’s meeting of the Board of Mayor and Aldermen.

“I told him I didn’t want to include him because I didn’t want the public and I didn’t want his colleagues thinking he made these changes,” Flaggs said as to why he did not include Moore in developing the new structure. “I made them.”

Flaggs said he briefed Moore on the new organizational chart Wednesday morning and that Moore appeared receptive to the plan. “He’s taking time to digest it,” Flaggs said.

“I told the chief this is no indictment on what he’s doing,” Flaggs said. “He’s providing us with leadership. We’re providing him another tool and reinforcing his ability to serve the citizens of Vicksburg. One crime in Vicksburg is too many.

“This does not diminish any authority or responsibility of the police chief; this gives him reinforcement.”

Flaggs said the chart was the result of six years’ experience working with the public and the police department, and a review of the present organizational chart “after some sleepless nights.”

The influence, he said, was a series of events occurring Sept. 21 and 22  when one man was shot and killed on Fayette Street and two teenagers were shot and wounded in a fight on North Frontage Road between the Ivy Place and Vicksburg Ford.

“We had one homicide and we had some shooting, and you would have thought we had a riot in Vicksburg the way it was perceived,” Flaggs said. “Why? Because there was not any collaboration or communication of what happened.”

The present organizational chart, he said, “Does not function; there are too many places where you cannot find information. It looks like it flows down from the mayor and police commissioner to the chief, but it goes all over the place.”

During Wednesday’s speech at the Vicksburg Warren Chamber of Commerce luncheon, Flaggs admitted he was among city leaders who approved the current structure. “I voted for it,” Flaggs said, looking at the current organizational chart, “and I still don’t know what I am looking at.”

The new chart, Flaggs said, assigns specific responsibilities to the deputy chiefs and makes the department more accessible to the public by identifying the proper person someone can contact for information about a wreck or a traffic ticket.

“You ought to be able to hold the deputy chiefs, the police chief responsible for that,” he said. “I want every person in this city to have access to any information that is available to the public.” The exclusion, he said, is information about ongoing investigations.

At the same time, he said, “We want a police chart that will be more responsible inside and functional so everyone is on the same page.

“This, in my opinion, is more functional, and it’s more accountable internally,” Flaggs said. “And if Mayfield and Monsour go with me on Friday, we’re going to approve it.”