Gators head to Canton for another Thursday night game 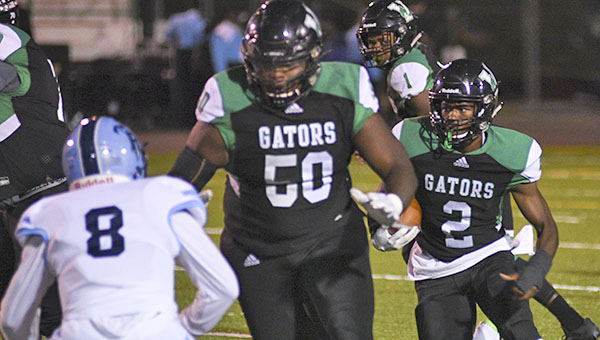 Vicksburg High’s Cedric Phillips (2) runs behind offensive lineman Marquise Blackmore (50). The Gators will go on the road this week to play Canton, in the second of three Thursday night games in a four-week span. (Courtland Wells/The Vicksburg Post)

The Vicksburg Gators are starting to get acclimated to working high school football’s early shift.

For the second time in three weeks, Vicksburg’s game has been moved up a day to Thursday because of weather concerns. The road game at Canton will also make it three times in four weeks that it plays on Thursday.

A home game against Cleveland Central was moved two weeks ago because of the threat of severe weather, and next week’s road game at Callaway had already been scheduled for Thursday because teams in the Jackson Public School District share several fields.

“This has never happened. Not here, not anywhere I’ve been. There’s a need because some teams share a field or whatever, but the weather goes so extreme. The first half of the year you couldn’t buy a raindrop and now when it comes, it comes in waves,” Vicksburg coach Tim Hughes said. “There’s a need to get people to go to the game. I get it. And there’s a need for safety more than anything, because it’s not just supposed to be rain. It’s supposed to be ugly stuff. It just makes a little more sense to move it.”

Hughes took the switch in stride, but did admit it will affect his team’s preparation. Monday and Thursday are usually light practice days in a normal week, with most of the on-field work being done on Tuesday and Wednesday. That timetable was accelerated when the decision was made late Monday morning to move the game, and heavy rain that fell throughout the day hampered efforts to work outside.

“We’re going to have to do more (on Monday) than what we need to do or should do,” Hughes said. “It gave us a line where we need to get certain things in and certain things covered. It just fast-forwards everything a day.”

Every game from here on out is an elimination game for the Gators (1-7, 0-4 Region 2-5A). A six-game losing streak that includes four region losses has left them with a mathematical, but not very realistic, chance to make the MHSAA Class 5A playoffs.

To qualify for the postseason, they’ll need to win their last three games and hope the teams in the top half of the division fall into sudden slumps. Of the teams currently in first through fourth place, the Gators have lost to three of them and thus would lose head-to-head tiebreakers

Canton (5-3, 1-2) is in a slightly better, but similar spot after losing three of its last four games. The Tigers broke a three-game skid with a 41-13 rout of Callaway last week.

Hughes said the key to snapping out of the funk is to focus on one game at a time and worry about the bigger picture if and when it comes into focus.

“It’s about winning, now. Right now it’s about winning a game. We’re not even thinking about what that means as far as (playoff) ramifications,” Hughes said. “If we get to get that in the last game of the season, then we’ll understand what the ramifications are. Right now, we feel like we could be 2-2 in district but we’re not. We’re 0-4. Let’s see if we can get to 1-4.”