Eagles dreaming of an upset vs. undefeated Greenville-St. Joe 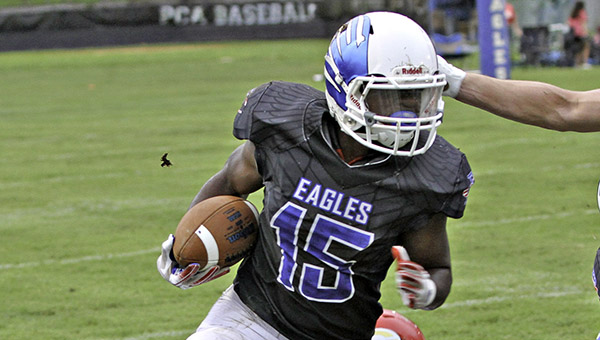 Porter’s Chapel Academy running back Tyler Washington will lead the Eagles into their season finale Friday against undefeated Greenville-St. Joseph. It is PCA’s homecoming game. (Paul Ingram/For The Vicksburg Post)

To finish a down season on a high note, all Porter’s Chapel Academy has to do is pull off the impossible.

The Eagles finish their season Friday night when Greenville-St. Joseph comes to town for homecoming. The Irish are two-time defending state champions, undefeated this season, are led by a pair of high-profile Division I commits, and are riding a 20-game winning streak.

Porter’s Chapel (2-7, 0-2 MAIS District 4-3A) has been outscored 95-0 in its last two games. Head coach Blake Purvis said the first step toward pulling off a monumental upset is not getting intimidated by the hype.

“We should just treat it like another game. It’s our next opponent,” Purvis said. “Hopefully block out the noise of them having a Mississippi State and Oregon commit and realize they play with 11 players just like we do.”

Greenville-St. Joe (9-0, 2-0) might play with 11, but two in particular stand out above the rest. Running backs Trey Benson and Dillon Johnson have combined for 2,667 rushing yards and 39 touchdowns this season and are among the best players at any level of high school football in Mississippi.

Johnson has committed to Mississippi State, and Benson to Oregon.

Purvis, however, said the Irish’s talent goes well beyond those two. Junior quarterback Mekhi Norris has thrown for 936 yards and 13 touchdowns, with only two interceptions in 88 attempts. The defense has 28 takeaways, including five by safety Rhodrick Gentry Jr.

“They’re talented at a lot of positions. They’ve got good offensive and defensive linemen that open holes. Those guys aren’t doing it by themselves,” Purvis said. “You can’t sell out to stop one or two guys. They can hurt you in many, many ways.”

Friday’s game will mark the end of another difficult season for Porter’s Chapel. It has finished with a .500 record twice in the past decade, but has not had a winning record since 2008.

This season opened with three consecutive losses and will end the same way unless the Eagles can find a way to beat the Irish. Purvis said a combination of an undersized roster and a schedule that turned out to be more difficult than it first seemed led to some of the struggles, but that he was encouraged by the team’s effort and positive attitude through it all.

“The guys continuing to stay upbeat has helped,” he said. “When you’re overmatched, you’re overmatched, and we’ve encountered that numerous times. I’ve been pleased with the effort and grit they’ve shown. In a situation like this, that’s all you can ask for.”

Purvis was also optimistic that the foundation for brighter days ahead is starting to be laid. Because there are only about 20 players on the roster, a number of underclassmen have seen significant playing time this season. An eighth-grader, John Wyatt Massey, started last week’s game against Glenbrook and will do so again Friday vs. Greenville-St. Joe.

“We’ve got a lot of good, young talent still. All of our underclassmen got quality reps this season. We’ve had freshman and sophomore starters, and even some eighth-graders got some starts,” Purvis said. “There is definitely some people that should be more comfortable and help us next year with the experience they’ve gotten.”