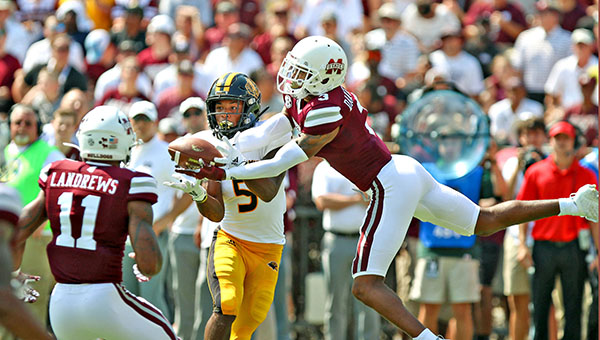 Mississippi State defensive back Cameron Dantzler (3) reaches in to break up a pass against Southern Miss. Mississippi State will go on the road Saturday to play SEC West rival Texas A&M. (Walter Frazier/For The Vicksburg Post)

STARKVILLE (AP) — Mississippi State has three straight losses and little margin for error in its postseason hopes as it prepares to play back-to-back road games with Texas A&M and Arkansas.

The Bulldogs (3-4, 1-3 SEC) also are dealing with injuries that will force them to count on big performances from key freshman defenders as they continue their chase for a bowl bid.

In a 36-13 loss to No. 2 LSU last week, freshman Martin Emerson earned his first career start at cornerback. Emerson was filling in for senior Maurice Smitherman, who suffered a season-ending injury last week. Backup cornerback Tyler Williams has missed the last three games due to a lower-body injury.

Emerson hasn’t been the lone freshman getting defensive reps of late. Cornerback Jarrian Jones is a top reserve at cornerback while defensive tackle Nathan Pickering has received significant reps this month.

“For (Emerson) to start as a true freshman against those kind of receivers (at LSU), those guys are representative of the young guys in this program,” Mississippi State coach Joe Moorhead said. “Jarrian, Emerson and Nathan Pickering and (freshman safety) Collin Duncan and others have a lot of young talent, and it bodes well for the future.”

The Bulldogs are also dealing with the loss of a couple of starters due to suspensions. Junior linebacker Willie Gay and senior defensive tackle Lee Autry must sit out eight games this season and sat out last week’s game against LSU. Neither is expected to play Saturday at Texas A&M (4-3, 2-2).

“Dantzler is one of the best corners we’ll play all year long — athletic,” Fisher said. “The other young corners are playing very well for them. Safeties, they get involved. Tons of pressures, tons of blitzes, different looks, different things up front. (It) will be very challenging.”

Since giving up 56 points and 578 yards in a blowout loss to No. 9 Auburn three weeks ago, Mississippi State has displayed small improvements on defense. In their last two league SEC contests, the Bulldogs have allowed 385 yards per game.

With five regular-season games left, Mississippi State needs three victories to reach bowl eligibility. Three of those games will be at home inside Davis Wade Stadium, but that includes a date with top-ranked Alabama in November.

“I think Texas A&M is big because it’s the next one,” Moorhead said. “We’ve got to have the mindset of us fighting, scratching and clawing. We’ve got to concentrate on what’s five feet in front of our face. We talked with the captains and leadership committee about our routine on the road, just trying to tweak that and making sure that’s correct.”

Mississippi State has earned bowl bids each of the last nine seasons, with eight of them coming under former coach Dan Mullen. In Moorhead’s debut season at Mississippi State last year, the Bulldogs went 8-5 with an Outback Bowl loss to Iowa.

Moorhead wants his players to focus on the task at hand and not look too far down the road.

“I don’t think there’s urgency in that we’ve got to get to four, five, six, seven wins and on down the line. We got to get that No. 4 win, and that’s what we’re focused on.”

“To get a good start, we’ve got to limit the amount of penalties we have,” Mississippi State tailback Kylin Hill said. “I’m expecting a packed crowd and they are a good team. We just have to stay focused and eliminate the penalties. I won’t say we feel a sense of urgency because guys are still going hard and nobody has given up. We are still pushing.”