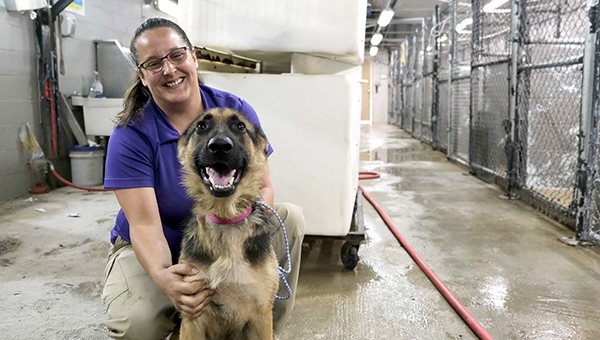 The Board of Mayor and Aldermen has included money for a new shelter in the city’s 2019 fiscal budget, Mayor George Flaggs Jr. said. He said he is waiting to hear from North Ward Alderman Michael Mayfield about a site.

The animal shelter falls under the city’s public works department, which Mayfield oversees, and Mayfield said he is looking at two sites in the northern part of the city — one in the Mission 66 area, and another on Sky Farm Avenue.

The Sky Farm Avenue site is 2 acres of city-owned property on the southwest corner of Cedar Hill Cemetery. The other site is off Mission 66 and has a 7,000 square-foot building, which Mayfield believes can be adapted for use as an animal shelter.

He said he has looked at other properties “and these are the two right now that I deem to be worthy.”

Mayfield said there is sufficient room for parking at the Mission 66 site, and “it’s not around any residential (area) at all, and it’s backed away from Mission 66. I think it’s an ideal location, especially for the size of the building.”

The city property on Sky Farm, he said, is a good spot, but fronts a church on Sky Farm and Mission 66 and five homes.

“The shelter would be directly across the street,” he said. “That’s the only thing I’m concerned about.” He said the property is accessible from Sky Farm and through the cemetery.

Vicksburg Animal Control director Kacie Lindsey discussed the potential plan for a new building at a meeting of the Port City Kiwanis Club Thursday. She said the present shelter on Old Mill Road near Waltersville Estates is too small, is in a flood zone and needs to be more centrally located.

She said the priority is to find a piece of city-owned property that would meet the needs of the shelter and be accepted by residents.

Lindsey said she and Richardson are planning trips to visit animal shelters in other cities of similar size to Vicksburg to get an idea of what should be included in the new shelter.

“We are looking to build a larger facility, not too much bigger than what we have,” she said. “We have a lot of wasted space in this shelter.”

The new shelter, Lindsey said, will be better laid out with more dog runs, a room for puppies, a cat room, adoption room, office space, storage/treatment room and a quarantine area for sick dogs.