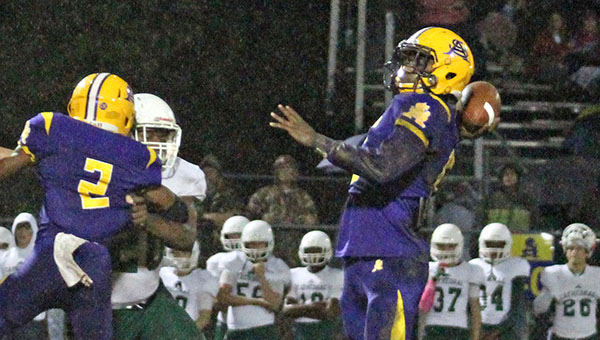 The latest installment of the storied rivalry between St. Aloysius and Cathedral was far from pretty. Playing in a steady rain, the teams combined for 11 turnovers in a variety of shapes and sizes.

All in all, it was one that both teams might rather soon forget.

It was also a night Alvin Brown made sure people will remember for a while.
Brown carried the ball 38 times for 175 yards and five touchdowns — four of them in the first half — to lead St. Al to a 35-18 victory over its Catholic School rival on Friday night.

“I got the first two and started thinking I had to get it down on the ground a little bit more. They were telling me already that I had four and needed five,” Brown said.

Brown’s big night sends St. Al (5-5) into the MAIS Class 5A playoffs on a two-game winning streak and a high note. The Flashes will go on the road to Natchez to play Adams County Christian in the first round next Friday. ACCS beat St. Al 40-23 on Oct. 11.

“The more players we get back, we know we have a decent team and we always seem to get better at the end,” St. Al coach Michael Fields said. “The only thing that was hurting us this year was injuries. We still have three or four guys I wish we had, but I still think we have a chance to get a playoff win next week.”

The teams traded scores in the first two quarters until St. Al found the end zone twice in the last 80 seconds of the first half to gain some separation.

A long punt return by Kieran Theriot gave the Flashes the ball at the Cathedral 28-yard line, and Brown scored on a 1-yard run with 1:17 to go.

Ben Ulery then intercepted Cathedral quarterback J.T. Taylor on the ensuing drive to put St. Al in business again at the 15-yard line. Brown scored on a 14-yard run with 23 seconds left to send the Flashes into halftime with a 28-12 lead.

“Our execution was poor all night. We failed to properly execute the play we had going. It was a safe play call and we just didn’t do what we were supposed to do. A turnover right before the half is a big momentum killer,” Cathedral coach Chuck Darbonne said. “Overall, as a team, we were flat the whole first half and it showed on the scoreboard. The second half, it was too much to come back from. I thought we played hard and executed better in the second half. If we had done that the whole game, it would have been a fight in the fourth quarter. But we got down too far and had to get out of our normal offense and couldn’t execute very well.”

As the intensity of the rain waxed and waned in the second half, the game became a comedy of errors. The teams combined for nine fumbles, five of which resulted in turnovers. Taylor also threw an interception, his third of the game, that led to a 6-yard TD run by Brown late in the fourth quarter.

“I think it was lack of focus, lack of concentration, and playing your rival. You get all hooked up into the talking and some of the stuff that’s going on and you lose your focus, and you’re not doing what you should do,” Fields said. “Twice we got inside the 10 and didn’t score. We fumbled both times, and it wasn’t weather fumbles. It was concentration fumbles.”

Cathedral did have a chance to get within one score. Bryson Moore scored on a 6-yard run with 8:54 left in the fourth quarter to pull the Green Wave to within 28-18. The two-point conversion failed, however, and it remained a two-score game.

Despite some sloppiness, St. Al was able to hold the ball long enough to keep Cathedral from getting back into it, and Brown’s fifth touchdown made it 35-18 with 1:51 to go.