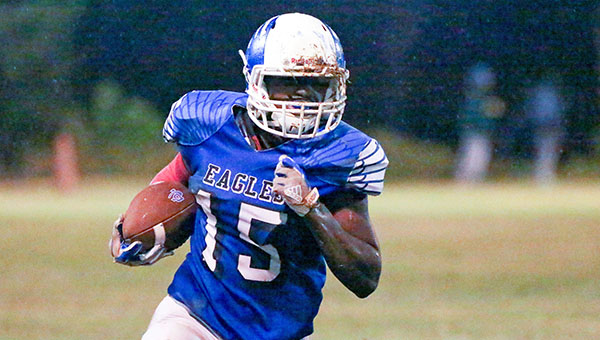 Greenville-St. Joseph came into Friday’s regular-season finale against Porter’s Chapel Academy with quite an impressive resumé. It did nothing to tarnish it, or leave the impression that it was anything but a heavy favorite to win another state championship.

Mekhi Norris threw two touchdown passes and returned an interception for a score, and Mississippi State commit Dillon Johnson ran for two touchdowns to lead undefeated Greenville-St. Joe to a 56-0 victory over PCA.

The Irish (10-0, 3-0 MAIS District 4-3A) scored all but three of their points in the first half and will head into the MAIS Class 3A playoffs as the No. 1 seed. They won the last two Class AA championships before the MAIS realigned its classification structure this season.

“They were very, very good. I was very impressed with them,” PCA coach Blake Purvis said. “They were also a very classy, sportsmanlike team. Probably the best sportsmanship of anybody we’ve played this year.”

Tyler Washington led PCA with 65 rushing yards, and Purvis gave some of his senior linemen a chance to run with the football in the second half. Austin Rudd and Jairus Cobbs were among several players who got one carry each.

“It was the last game, and some of those guys have been blocking all year and they’re program guys. I wanted to reward them,” Purvis said.

PCA (2-8, 0-3) finished the season on a three-game losing streak in which it was outscored 151-0 by district opponents St. Joe, Glenbrook and Greenville Christian. Purvis still was proud of his team for not giving up during a difficult season, and was optimistic about the future.

“They fought to the end and finished as strong as they could,” Purvis said. “We’ve got some talent returning. We’re going to return three of our five linemen, two other guys that got good reps, Tyler at running back is our leading rusher, and we’ve got some good young talent in junior high that will be another year older. We’re going to be young, but we’ll have more experience than what you might expect.”