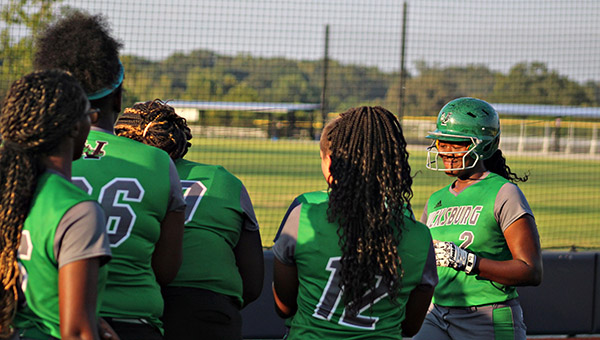 Vicksburg High’s Sha’niya Lockridge is greeted at home plate by her teammates after hitting a two-run home run in the fifth inning a game against Warren Central on Sept. 17. Thursday, the Mississippi High School Activities Association decided it would no longer sanction slow-pitch softball in the state. (Ernest Bowker/The Vicksburg Post)

The discontinuation was effective following the 2019 season’s recent completion.  The association said in a statement Thursday that its executive committee of school administrators made the decision as participation in the sport decreased to half of what it was six years ago.

Both Vicksburg and Warren Central had continued to compete in slow-pitch softball.

A majority of schools governed by the agency are still signed up to participate in fastpitch softball in the spring, which remains sanctioned. Association Director Don Hinton says fastpitch is one of Mississippi schools’ largest sports in terms of participation.

“Fast-pitch softball has continued to grow and has become one of our largest sports in terms of participation for our schools,” MHSAA Executive Director Don Hinton said. “More and more girls and young ladies are focusing exclusively on fast-pitch, which is played on the college level. Those changes are reflected in many schools discontinuing slow-pitch even before the state association reached this point.

“The growth of volleyball, which is also a fall sport, has paralleled the decline in participation with slow-pitch. The MHSAA expanded from three to four classifications in volleyball this year to accommodate a number of our schools that have added the sport in the past few years. We are expecting even more to do so in the near future.”

During a season when yard signs supporting a particular candidate are the norm, there were a few more placed Thursday... read more