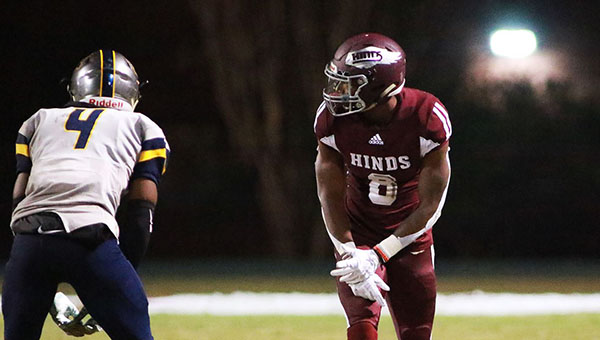 RAYMOND — Hinds Community College’s best football season in five years will not include a trip to the playoffs.

Omni Wells ran for 104 yards, most of it on a 65-yard touchdown that gave Mississippi Gulf Coast the lead for good, and the top-ranked Bulldogs beat No. 6 Hinds 31-21 on Thursday to clinch the MACJC South Division championship.

Hinds (7-2, 4-2 MACJC South) posted its highest win total since 2013, but was eliminated from playoff contention on the final night of the regular season. The Eagles’ two losses came within the division to Gulf Coast and Jones, the latter of which locked up the second and final playoff spot by beating East Central 35-13 on Thursday.

“We will be back. Next year, we will return some impact players who were either injured or freshmen this year, and we will continue to hit the road hard recruiting to bring in the next great class to Hinds,” Hinds head coach Larry Williams said. “We intend to continue to keep taking steps forward as a program, never backward.”

Thursday’s game was all or nothing for Hinds. It would have won the South Division title by beating Gulf Coast (9-0, 6-0), or been eliminated from the playoffs entirely with a loss. For a time, the Eagles looked like they might pull off the upset.

Don Ragsdale’s 20-yard touchdown run in the second quarter put Hinds ahead 14-10. It is just the second time this season that Gulf Coast has trailed in a game. The first was earlier in the game when Hinds took a 7-0 lead on a 50-yard TD pass from Elijah Walker to Jakarius Caston.

The second deficit didn’t last long for Gulf Coast. The Bulldogs struck for two scores in the last 7 1/2 minutes of the second quarter — Wells’ 65-yard run and a 2-yard run by Shaun Anderson — to take a 24-14 lead into halftime.

On the opening possession of the third quarter, Gulf Coast drove 65 yards in 16 plays to score on Deondre House’s 4-yard run for a 31-14 lead.

“There was never any real sense of panic,” Gulf Coast coach Jack Wright said. “There was no real sense of surprise. The surprise is we haven’t been behind before. This is a tough league, so going behind in this league is no surprise. Hinds was really playing for their life. They had to win to make the playoffs, and they’re a very good football team playing at their place. There’s no surprise that they played really well and put us behind early.”

Gulf Coast piled up 487 total yards, 276 of which came on the ground. Austin Bolton finished with 95 yards in addition to Wells’ 100-yard game. The Bulldogs’ defense forced four turnovers.

Jones quarterback Fred Barnum, a former Warren Central star, was 12-of-22 passing for 129 yards and one touchdown. Running back Malik Shelley, a former Vicksburg High star, ran for 55 yards on a team-high 14 carries.

At 4-2 in the North, the Rangers (7-2 overall) were crowned division champs after Holmes’ defeat of Coahoma earlier in the day and for having the best overall record among their division counterparts, according to MACJC guidelines on tiebreakers.

Northwest Mississippi will host Jones College in the first round of the MACJC playoffs on Nov. 2 at 2 p.m.

The No. 2 seed from the North won’t be settled until Saturday. Itawamba and Holmes are tied with a 4-2 division record, and East Mississippi can join them if it beats Northeast Mississippi in its regular-season finale.

If there is a three-way tie, East Mississippi would win the tiebreaker and get the playoff spot. If it’s a two-way tie, the nod will go to Itawamba.

Thursday’s defeat was only the third home loss for Northwest since 2015. Itawamba quarterback Clark Mills completed 23 of 40 passes for 273 yards and a touchdown, and also ran for a score.

Mills’ 59-yard TD pass to Collins Woods III with 5:25 remaining tied the game, and the PAT by Skylar Grissom put Itawamba (5-4, 4-2) ahead for good. Grissom missed two PATs earlier in the game, but did have a 34-yard field goal in the second quarter.

After the game, it was announced that Pearl River head coach Ted Egger will not return for the 2020 season. Egger had a 10-17 record in three seasons with the Wildcats.

Holmes rolled up 456 yards on the ground and only threw three passes. Its only completion of the game was an 11-yard touchdown pass from Batey to Martavius Dill with 20 seconds left in the first half.

Dewayne Betts ran for two touchdowns for Coahoma (1-8, 0-6). The Tigers finished the season with eight consecutive losses after upsetting Jones in their opener.