Southern Miss looks to bounce back vs. Rice 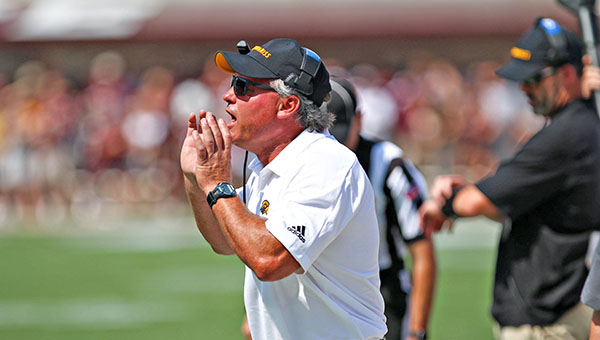 On paper, playing a winless team that ranks among the worst offensive teams in the country should make for an easy weekend for Southern Miss.

The Golden Eagles go on the road Saturday to play Rice, after losing a key game last week.

Between the way his own team fell flat in the second half and blew a 10-point lead to Louisiana Tech, and a Rice squad that has been oddly competitive during a seven-game losing streak, Hopson isn’t taking anybody lightly as the Golden Eagles try to get back on the winning track.

“They’ve had a tough schedule and a tough non-conference schedule,” Hopson said. “Again, we understand we’re playing a good football team. They just took the team we got beat by to overtime. Trust me, Rice has our complete and total respect.”

The Owls, though, have so far played three ranked teams — No. 14 Baylor, No. 15 Texas and No. 25 Wake Forest — and the Louisiana Tech team that beat Southern Miss last week to take over first place in C-USA’s West Division.

Four of Rice’s seven losses have been by eight points or less, including 23-20 in overtime against Louisiana Tech and a 31-27 setback last week at UTSA.

“I want these kids to get a win for all of their hard work (and) all of the things that we’ve talked about,” Rice coach Mike Bloomgren said. “I thought we had a great two weeks of prep going into (the UTSA game). Very simply, we didn’t come out the other side like we wanted to. We took another team to deep water in this conference. Our kids are fighting and doing some great things.”

Southern Miss (4-3, 2-1) has bigger aspirations than just winning a game. It is still very much in contention for the West Division championship. Beating a struggling team like Rice — and putting last week’s disappointment behind — is essential to achieving that.

The Golden Eagles were outscored 28-3 after taking a 27-17 lead late in the first half, and quarterback Jack Abraham threw four interceptions. One of those picks was in the end zone in the fourth quarter, and another was returned for a game-clinching touchdown.
Abraham had thrown four interceptions total in the first six games this season.

“It’s a team effort, not one guy making a mistake. Sometimes it’s up front, sometimes it’s receivers, sometimes it is the quarterback, but as a head coach, it’s my mistake. At the end of the day, we had some missed executions offensively,” Hopson said. “I’ll always say, and I said it last week and everybody probably thought it was coaching cliché, but we have to execute. Saturday, those were things we didn’t do. We have to be sharper this week.”