Spooky Sprint will go on, rain or shine 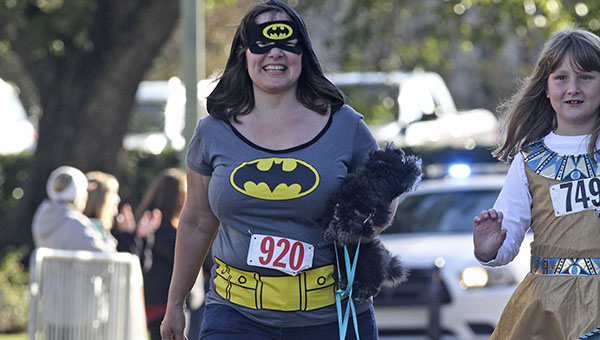 Instead of witches and superheroes, the most popular costumes at this year’s Spooky Sprint 5K might be fishermen and weather bogeyman Jim Cantore.

Despite heavy rain in the forecast for Saturday morning, the fifth annual Spooky Sprint 5K run and race walk will proceed, race organizer Kristi Smith said. The Halloween-themed race through downtown Vicksburg features many runners and walkers competing in costume. A Halloween carnival is also set for after the race.

The race will begin at 8 a.m. Saturday at the Bancorp South Building at 820 South Street. Smith said contingency plans are being made to deal with the rain, but none involve postponing it.

“Rain or shine, we’re going to have a run. We’re going to push everything under the parking garage if we need to,” said Smith, who is also the director of development and alumni affairs for Vicksburg Catholic Schools. The event is a fundraiser for VCS. “We’ve got big blow-ups, games, awards, the whole nine yards. We’re looking forward to another big event. The rain has not deterred anyone.”

Smith said nearly 500 people have already registered for the event. Those who pre-registered can pick up their packets Friday from 10 a.m. to 6 p.m. at the St. Francis Xavier Elementary School foyer. Late registration will also be open then, as well as from 6 to 8 a.m. Saturday at the race site.

The entry fee is $35 for the 5K run and walk, or $20 for the children’s 1-mile fun run. A “Virtual 5K” option is available for $25, where people will receive a race T-shirt but won’t have to run — perhaps an appealing option on a weekend in which two to three inches of rain could fall on the Vicksburg area.

“The Virtual 5K is a way to support the school if you can’t make it or don’t want to run,” Smith said.

Almost from its inception the Spooky Sprint has been one of Vicksburg’s most popular running events. More than 300 people have participated each year. The weather might suppress late registrations this year, but Smith was pleased with the overall upward trend.

“It’s important that we continue to give back to our community by sponsoring community events that not only allow family and friends to gather, but promote healthy living through exercise,” Smith said. “We are thrilled that in five years Spooky Sprint has grown to be the largest 5K run and 1-mile fun run in Vicksburg and one of the largest in Mississippi. We want to thank all of our many sponsors who have made this event possible.”

The Spooky Sprint will be the first of several Halloween-themed sporting events in and around Vicksburg in the coming days.

On Tuesday, both Warren Central and Hinds Community College will play their annual Halloween softball games. Players from each school’s softball and baseball teams dress up in costumes and play a co-ed slow-pitch game with the proceeds going to charity.

Warren Central’s Halloween Spooktacular is Tuesday at 6 p.m. at Halls Ferry Park’s National Field. Admission is $5 and children under 12 get in free. All proceeds will benefit the family of Natalie McMillian, a Vicksburg teenager who recently passed away.

Also on Tuesday at 6 p.m., Hinds will host the “Monster Mash at Moss.” General admission is $5, or $2 with a Hinds ID. Children under 12 are admitted free. Proceeds go directly to the Batson Children’s Hospital in Jackson.

SPOOKY SPRINT 5K
The fifth annual Spooky Sprint 5K is scheduled for Saturday in downtown Vicksburg.
The race will feature a 5-kilometer run and race walk, as well as a 1-mile fun run beginning at 8 a.m. Runners and walkers are encouraged to wear costumes, and afterward there will be a Halloween carnival with food, music and awards. The race will begin at the BancorpSouth parking lot, at 820 South St.

The Spooky Sprint 5K is a fundraiser for Vicksburg Catholic Schools.