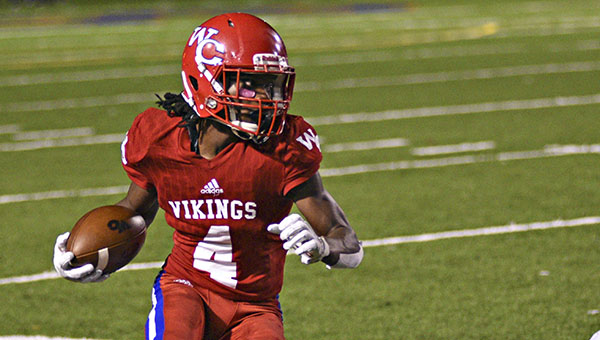 Warren Central's Antonio Thomas (4) runs last week against Murrah. Warren Central will go on the road Friday night to play Clinton, and can clinch a berth in the MHSAA Class 6A playoffs with a victory. (Courtland Wells/The Vicksburg Post)

Warren Central is smack dab in the middle of a five-week stretch in which it will play the top three teams in Class 6A. None of those games are bigger — or at least more pivotal — than the one they’ll play against an unranked team on Friday night.

The Vikings (5-3, 3-1 Region 2-6A) can clinch a playoff berth by beating Clinton (4-4, 2-2) on Friday night. A loss, on the other hand, would leave them with an uphill climb with only two regular-season games remaining.

It’s a game with the highest of stakes, between longtime rivals who often seem to find themselves in this situation. Each of the last two years, Warren Central has finished fourth in Region 2-6A and Clinton fifth, with their head-to-head meeting being the deciding factor.

Friday’s game is at 6 p.m. at Clinton. The start was moved up one hour from its usual time because of the threat of severe weather.

“We’ve always had some barn burner games. We’ve had games go to the wire, big games with big implications, we’ve had field goal games, a game decided by a two-point conversion. It’s always highly competitive when we play, and there’s a lot at stake,” Warren Central coach Josh Morgan said.

This year’s Region 2-6A playoff race has largely split along a line between the haves and have-nots. No. 1 Starkville (4-0 in region play), No. 2 Madison Central (3-1) and No. 3 South Panola (3-1) all seem secure based on their record and remaining opponents. Greenville (1-3), Murrah (0-4) and Germantown (0-4) have been eliminated or are close to it.

Then, in the middle, are Warren Central and Clinton. Their matchup this week will affect not only their own playoff fates but the rest of the region as well.

A Warren Central win on Friday would also clinch playoff berths for Starkville, Madison Central and South Panola. A Clinton victory would keep the Arrows alive and keep some of the other teams from clinching for at least another week.

Madison Central and South Panola played each other on Thursday night.

“It’s a lot at stake and we’re all playing for the same thing, and that’s a playoff spot,” Morgan said. “When both teams are in the same predicament it makes the game more important and that’s where we sit. Right now our focus is on us and doing everything we can to win this game. But everything will be clear after our game and the Madison-South Panola game. It’s simple on our end.”

Although it has a key role in the bigger picture, Warren Central is trying to keep its focus small this week. Starkville comes to town next week, and the regular season wraps up on Nov. 8 with a road trip to South Panola.

Morgan was confident the Vikings could win either of those games to secure a playoff berth, but recognized that beating Clinton and taking care of it this week was a far more appealing option than having to beat one or both of the top three teams in the state.

If Clinton wins Friday, the Vikings could wind up in fifth place for the moment depending on the outcome of other games.

“We’re treating it as a must-win, do-or-die game, because that’s what it is,” Morgan said.

The Vikings also need to rebound from a lackluster showing last week against Murrah. They won 12-0 in a game that was never really in doubt, but was never all that comfortable, either. The Vikings only had 151 yards of total offense, fumbled four times and lost two, and failed to score on three trips inside the 10-yard line.

Morgan was glad to get a win on an off night, but acknowledged that a similar effort against a better team might not end nearly as well.

“It’s a bounce back game, and it’s the most important game of the year,” Morgan said. “We’ve got to play better and we know that. We have to play with confidence to win. We have to have the confidence of a winning program to compete in and win these games.”