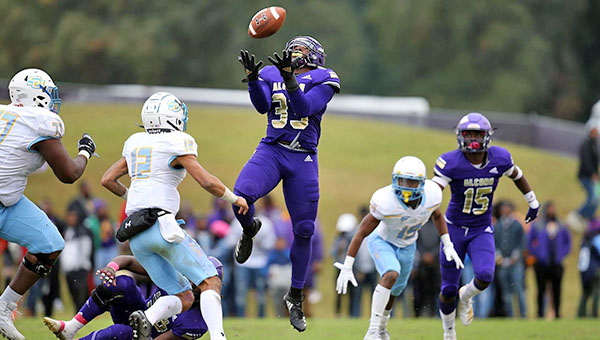 LORMAN (AP) — Felix Harper threw for 277 yards and accounted for three touchdowns, and Alcorn State scored 24 consecutive points in the second half to defeat Southern University 27-13 on Saturday.

Trailing 6-3 early in the third quarter, Harper scored on a 1-yard run for a 10-6 lead. Later in the second half, he threw four yards to De’Shawn Waller for a touchdown, Corey McCullough kicked a 31-yard field goal and Harper threw for another touchdown — 11 yards to LeCharles Pringle.

The Jaguars (4-4, 3-1) have now lost nine of the last 10 meetings with Alcorn, but might get another shot at the Braves in the SWAC championship game. Both teams continue to lead their respective divisions in the standings.

“That’s what we tell the guys all the time, we don’t wait for anybody to lose or hope somebody beats somebody, things of that nature. We control our own destiny from the beginning of the season and we come out and play to win every SWAC game,” Alcorn head coach Fred McNair said. “This was a big game for us today in the conference against a very good football team in Southern.”

Dominic Franklin ran 22 times for 79 yards and DeAndre Johnson ran 11 times for 65 yards for Texas Southern. Johnson completed 4 of 11 passes with an interception.

“Definitely a defensive game, but a good team win,” Southern Miss head coach Jay Hopson said. “Not the offense’s best day, but thought we played well on special teams for the most part and played well defensively.”

Andrew Stein kicked field goals of 23 and 34 yards, improving to 12-of-14 this season. Jack Abraham was 23-of-36 passing for 207 yards with an interception. Ten completions — a career high — went to Tim Jones for 96 yards.

Austin Trammell caught a 15-yard pass from Wiley Green for Rice’s only points with six minutes left in the third quarter.

Wright led the Choctaws with 135 rushing yards on 18 carries, and scored two touchdowns. Hawthorn finished with 120 yards and one touchdown on 19 carries. Ja’Mori Mark added 81 yards and a touchdown. The Choctaws only attempted three passes.