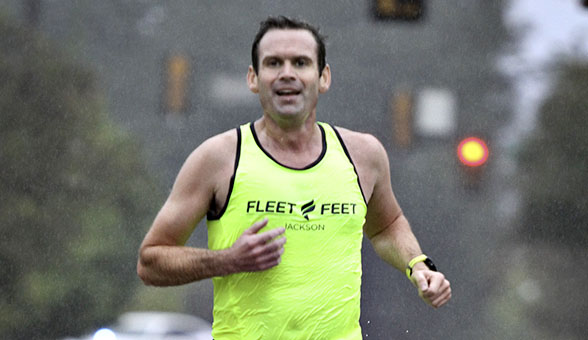 Who won the Spooky Sprint 5K, you ask?

In what was likely their final race in Vicksburg, the husband and wife tandem of Oliver and Laura Child swept the 5K run titles Saturday in downtown Vicksburg.
Oliver Child won the overall title with a time of 18 minutes even, while Laura won the women’s championship in 19 minutes, 36 seconds.

The British couple is nearing the end of a two-year assignment in Vicksburg with the U.S. Army Corps of Engineers and will soon head off to their next post. In 2018 and 2019, they combined for eight men’s or women’s championships in Vicksburg’s five Mississippi Track Club races — the Spooky Sprint, Over the River Run, Mad Scientist 5K, Run Thru History and Chill in the Hills.

In the 5K race walk, 63-year-old Joyce Beacham crossed the finish line in 38:40 to win the overall title, and 13-year-old Blair Farrell was second in 40:17. Charles Atkins, Jr., was third overall and won the men’s championship with a time of 40:23.

Hendrix Eldridge won the girls’ fun run and was fourth overall, in 7:25.

Approximately 500 people registered for the Spooky Sprint, and nearly 200 braved the chilly, rainy conditions on Saturday morning to compete. In keeping with the theme of the light-hearted race, many wore Halloween costumes.

The Spooky Sprint 5K is a fundraiser for Vicksburg Catholic Schools.