Police officers, firefighters lead ‘Walk a Mile in Her Shoes’ 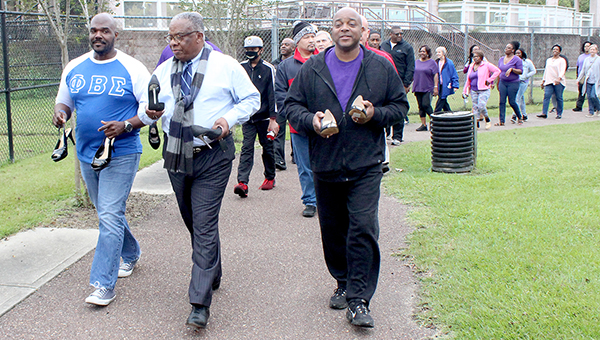 Mayor George Flaggs Jr. was among those government and community leaders who took part in Sunday's "Walk a Mile in Her Shoes" event at City Park. (John Surratt/The Vicksburg Post)

About 20 members of the Vicksburg Fire and Police departments joined by Mayor George Flaggs Jr. and local residents took a Sunday afternoon walk.

Holding women’s shoes and chanting “stop domestic violence,” the firefighters and police officers led the group along the walking trail at City Park to bring attention to domestic violence as part of a program called “Walk a Mile in Her Shoes.”

“Walk a Mile in Her Shoes,” Municipal Judge Angela Carpenter said, “is a program based on the saying that before you know someone, you should walk a mile in their shoes.”

The event was an opportunity for men to show their support for victims of domestic violence by either walking in women’s shoes or carrying them. There were, however, no volunteers to wear and walk in women’s shoes.

The walk was the closing event in the empowerment program’s four-day observance of Domestic Violence Week. It also featured brief comments from city officials.

“Monday, Tuesday and Wednesday, we had workshops and each one of those workshops was designed to bring awareness to domestic violence,” Carpenter said. “We designed it to educate, inform and inspire not only the community, but also the victims and survivors of domestic violence.”

Walk a Mile in Her Shoes was created in 2001 by Frank Baird as an opportunity for men to raise awareness in their community about the serious causes, effects and remediations to men’s sexualized violence against women by walking in women’s shoes.

Voter interest piquing ahead of next Tuesday’s election