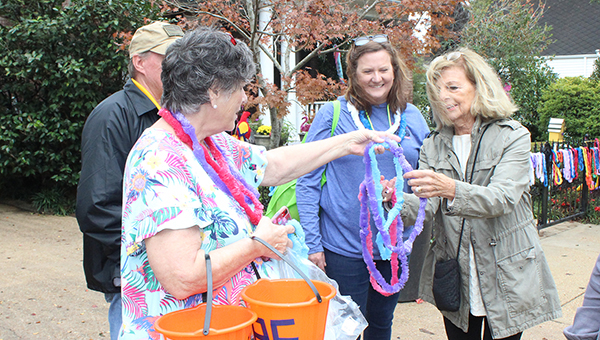 Launo Moore hands out leis to some of those attending last fall's Porchfest on Drummond Street. (John Surratt/The Vicksburg Post)

Drummond Street was lined with booths, and music flowed from the porches of several homes to serenade visitors for the Fostoria Neighborhood’s second Porchfest.

It was an event that almost didn’t happen. Tropical Storm Olga made its way north through Louisiana and into western Mississippi Friday, hitting the Vicksburg area with rain and high wind.

The rains stopped just before Porchfest began at 11 a.m., but a stiff breeze from the storm remained, occasionally threatening the multiple canopies set up by vendors.

“We talked to God and it went away,” Fostoria resident Launo Moore said as she draped visitors with leis when they stepped on Drummond Street. “We knew it would happen. We want to thank all the sponsors who have helped us make Porchfest such a great event.”

A variety of craft and food booths lined Drummond Street, giving visitors an opportunity to look at a variety of offerings both for gift ideas and lunch.

Not far from where Moore was greeting people, Knights of Columbus’s hot dog and hamburger booth was doing brisk business selling items for lunch.

“Business is pretty good; it’s picking up,” said Theresa Parker as she helped prepare the food.

Across the street, Ilana Dalaire sporting a drape resembling butterfly wings, stood in from her grandmother’s house watching the crowd and talking with neighbors.

“This is really exciting,” she said.

Dalaire said she was concerned about the rain.

“I was watching the radar. I knew it would leave. It’s gone and the people are still coming,” she said.

About a block away, Renee Irons was sitting wrapped in a blanket as she talked to customers at her Feathers & Strings Studio.

“This is my second year, coming here, but my first as a vendor,” she said. “I came last year to see what it was about. I was worried about the rain, and I waited until this morning to decide. Once the rain stopped, there was no way I was not coming.”

Susan Price, who visited Irons’ booth, said she was visiting Porchfest for the first time.

“We missed it last year because we were on a trip,” she said. “I  always like to drive down Drummond Street when I go downtown. I have always loved this area.”