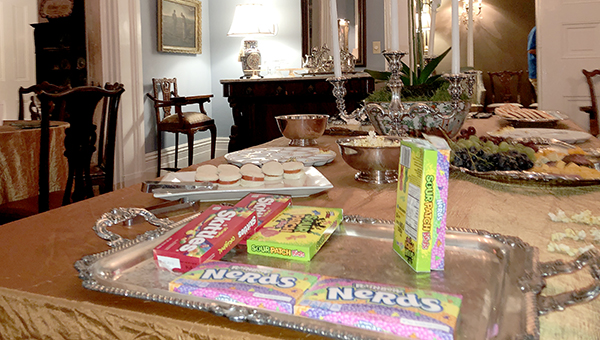 Candy served on silver trays were part of the spread provided during a watch party at Duff Green Mansion. The watch party was for the A&E show, Ghost Hunters, which featured the iconic Vicksburg home in a recent episode. (Catherine Boone Hadaway/The Vicksburg Post)

When one of Vicksburg’s historic homes makes national television, it’s something to get excited about.

A&E’s Ghost Hunters visited the Duff Green Mansion earlier this summer to investigate potential paranormal activity in the home. The episode had an intriguing plotline: Harry Sharp and his family, as well as guests who stayed at the bed and breakfast during their ownership, had numerous ghost encounters, but current owner Harley Caldwell was skeptical. Sharp asked Ghost Hunters to investigate in an attempt to convince Caldwell otherwise.

The show featured many beautiful shots of the home, as well as conversations with Sharp and his immediate family, Lydia Nettles (Sharp’s granddaughter) and Caldwell. Specific rooms of the home were shown — from pristine antique furnishings to glimpses of china, crystal and a portion of the ceiling that has been exposed with plexiglass to showcase damage from a cannonball. The show’s hosts led conversations that detailed Vicksburg’s and the home’s history as an important part of the Civil War, like when the home served as a hospital and housed many soldiers who underwent amputations.

It is evident the cast’s time in Vicksburg made an impression on them by Ghost Hunters paranormal historian and site analyst Mustafa Gatollari’s blog post on Distractify.com. Gatollari detailed visiting a local antique shop, where he found a “painkiller bullet,” the item at the heart of the common saying “bite the bullet.” His post was accompanied by a few photos he took while at the home, showcasing its interiors, and confirmed the cast had a warm southern welcome to the town we call home.

In the end, Ghost Hunters was inconclusive about whether or not ghosts are present at Duff Green, and Caldwell is still skeptical.

“So are there ghosts at the Duff Green Mansion?,” Gatollari’s post read. “If it is haunted, then the data we collected suggests that it’s residual and in no way conscious. The ‘energy’ of whoever was there was captured in this historic location and sporadically manifests itself in ways that don’t seem like the entities are in control.”

As for Caldwell’s resolution that the home be remembered for its history and opulence, as long as she is serving candy on silver trays, I think it will be remembered as just that.

Catherine Boone Hadaway is publisher of The Vicksburg Post. She can be reached at catherine.hadaway@vicksburgpost.com.