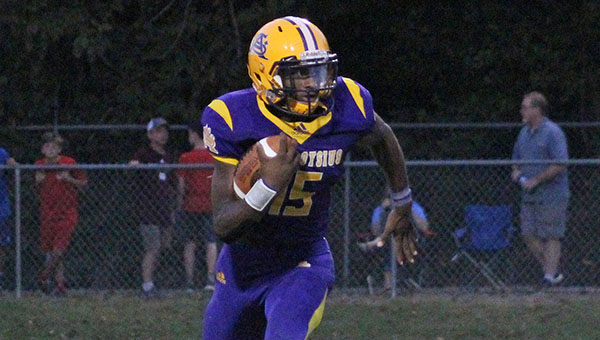 St. Aloysius quarterback Alvin Brown runs with the football earlier this season. Brown has rushed for 1,174 yards and 13 touchdowns this season, and Friday against Cathedral carried the ball 38 times for 175 yards and five TDs in a 35-18 victory. (Ernest Bowker/The Vicksburg Post)

You’re in Four Down Territory. Each week we’ll highlight four notes, stats or trends from the weekend that was in Mississippi high school football, college football and the NFL.

By this point in the season, most teams have a handful of guys they rely on to carry the load. Few, however, are asking one person to do as much as the St. Aloysius Flashes are with Alvin Brown.

The senior quarterback either ran or passed the ball on 48 of St. Al’s 55 offensive snaps in a 35-18 victory over Cathedral on Friday. On a couple of the plays where he didn’t control the ball, he served as a lead blocker on sweeps for receiver Brennan Williams.

Brown carried the ball 38 times for 175 yards and five touchdowns, and was 5-of-10 passing for 36 yards as St. Al won its second game in a row. It’s a staggering workload, but one Brown didn’t seem fazed by.

Brown surpassed the 1,000-yard rushing mark for the season, which is especially impressive considering he missed one full game and most of another because of injury. The 38 carries against Cathedral were a season high, and it also was his sixth 100-yard game.

“He’s a workhorse. We just have to rest him and keep him going. We go as he goes. His rest is when we pass the ball,” St. Al coach Michael Fields said.

Brown’s workload has increased out of necessity as the season has gone along. The original plan was to use him as a running back and split carries with quarterback Phillip Upshaw. Things changed when Upshaw suffered a back injury that first limited him, then eventually ended his season.

Brown had played quarterback last season and this season while Upshaw was out, but has now moved to that position full time.

Fields said that some careful management during the week, as well as some hard lessons learned early on, have allowed Brown to handle the heavy workload.

“We rest him pretty well during the week, and he’s in pretty good condition. As long as we keep him healthy, he’s OK,” Fields said. “Early in the year he took some licks he shouldn’t have took, but now he’s learning how to go down and how to fall and do some things to preserve himself.”

St. Al (5-5) will go on the road to play Adams County Christian in the first round of the MAIS Class 5A playoffs on Friday.

LSU ascended to No. 1 in the Associated Press Top 25 released Sunday in one of the closest votes in the poll’s 83-year history.

LSU (8-0) finished two points ahead of No. 2 Alabama (8-0), and eight ahead of No. 3 Ohio State (8-0). Eight points separating first from third is the fewest during a regular-season poll since the current point system went into place in 1978. The previous low was Dec. 3, 1979, when No. 1 Ohio State was 10 points ahead of No. 3 Southern California, with Oklahoma in between, two back of the Buckeyes.

In the AP poll, teams get 25 points for a first-place vote, 24 for a second, and so on through one point for a 25th-place vote.

Alabama received the most first-place votes this week, with 21. LSU and Ohio State got 17 each, and No. 4 Clemson (8-0) got seven.

LSU is ranked No. 1 for the first time since 2011, and the 31st time overall. It started this season ranked No. 6, moved up to No. 2 three weeks ago, and might spend at least the next two weeks in the top spot unless some voters change their minds again.

LSU and Alabama are both idle this week, ahead of their showdown Nov. 9 in Tuscaloosa. The first College Football Playoff rankings of the season will also be released that week, on Nov. 5.

After earning a spot as a unanimous No. 1 atop the Mississippi Associated Press Overall and Class 6A polls, Madison Central has gone into a slump and left Region 2-6A up for grabs.

The Jaguars lost their second game in a row, 38-34 to South Panola, on Thursday. It’s the first time since early in the 2016 season they have lost back-to-back games.

Madison Central (7-2, 3-2 Region 2-6A) doesn’t appear in danger of missing the playoffs — it only needs to win one of its last two games against Germantown (4-5, 1-4) and Greenville (3-6, 1-4) to qualify — but is currently in fourth place in Region 2-6A after sitting in first through three games of the region schedule. Its hopes of winning its first region title since 2013 are also all but over.

Starkville (8-2, 5-0) is in first place and can clinch the Region 2-6A championship by beating Warren Central (6-3, 4-1) this week. Warren Central can also win the title by winning its last two games, against Starkville and South Panola.

South Panola (9-1, 4-1) would need to beat Murrah and Warren Central, and hope Starkville loses its last two games to WC and Clinton, to finish first.

4
Mississippi College and Shorter both got a little bit closer to milestones after Saturday’s game in Clinton.

With its 41-20 victory, Mississippi College (4-3, 3-2 Gulf South Conference) needs one win in its last three games to finish at least .500 for the first time since 2009.
Shorter, meanwhile, is six losses away from infamy. Saturday’s defeat was its 47th in a row since it beat Mississippi College on Oct. 3, 2015. The Division II record for consecutive losses is 52, set by Lock Haven from 2007-12.

Shorter could break the record early next season. It only has three games left this year — Delta State and Allen University at home, and on the road at Florida Tech.