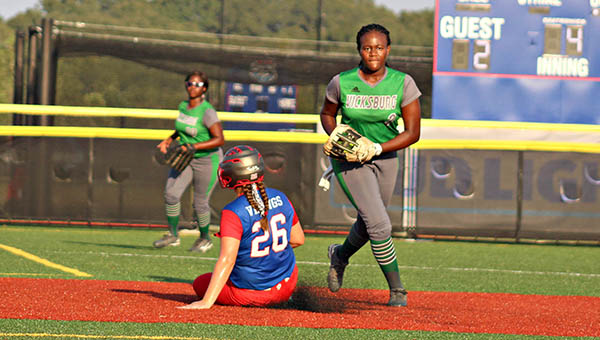 Vicksburg High shortstop Sha’Niya Lockridge (2) steps across second base after forcing out Warren Central’s Kayleigh Beard (26) during a slow-pitch softball game this season. The MHSAA announced last week that it is eliminating slow-pitch as a varsity sport. (Ernest Bowker/The Vicksburg Post)

For nearly 20 years, talk had swirled of the impending demise of slow-pitch softball as a high school sport in Mississippi. The number of teams playing it gradually declined, while at the same time participation in volleyball and fast-pitch softball boomed.

The end finally came late last week, when the Mississippi High School Activities Association announced it was discontinuing slow-pitch softball as a sponsored sport, effective at the end of the recently completed 2019 season.

Although the news hardly came as a shock, Warren County’s coaches expressed disappointment upon hearing it. Getting rid of slow-pitch, they said, will hurt the fast-pitch programs in the long term by also eliminating a valuable development period for younger players.

“I’m up in the air about it,” Vicksburg High coach Brian Ellis said. “The biggest thing with myself and Coach (Dana McGivney at Warren Central) and our programs in Vicksburg, is that is our teaching time. Without slow-pitch we don’t get our kids until the regular season of fast-pitch starts. This year it was a big thing for both of us. We both were starting seventh- and eighth-graders. It’s big when you’re teaching the basics of the game. When you lose it, you’re losing a lot of time with the junior high kids.”

Fast-pitch softball was introduced as a varsity MHSAA sport in the 1990s — Vicksburg and Warren Central both started their programs in 1999 — and gradually overtook slow-pitch as the more popular of the two girls’ bat and ball sports.

“More and more young ladies are focusing exclusively on fast-pitch, which is played on the college level,” MHSAA executive director Don Hinton said in a statement announcing the decision. “Those changes are reflected in many schools discontinuing slow-pitch even before the state association reached this point.”

For coaches, however, slow-pitch still served a purpose. Ellis and McGivney both used it more as an unofficial fall practice period, where they were able to work on defense and fundamentals during full practices.

When a sport is out of season, practice time is severely limited. Junior high players can only work out during a 50-minute school period — which includes the time needed to transport them to and from the high school — and the drills they can do are also restricted.

With slow-pitch gone, the bulk of the preseason work can’t begin until just before the season does in February.

“We won’t get any chance to work with our kids until two weeks before the season starts,” McGivney said. “We’re going to have to find a way to work with those kids or our program is going to go the way of a lot of others and struggle.”

One way to alleviate the problem, McGivney and Ellis agreed, was to start junior high fast-pitch programs at both Vicksburg and Warren Central. They were concerned there might not be enough support or funding to make it happen, though.

“I’ve been making alternative plans for our program to make an adjustment. One is to add a junior high program just to have them for more than those 50 minutes each day,” Ellis said. “You always try to make Plan B when Plan A goes away, but if Plan B goes away too, then you’re stuck.”