Gators trying to finish season with a winning streak 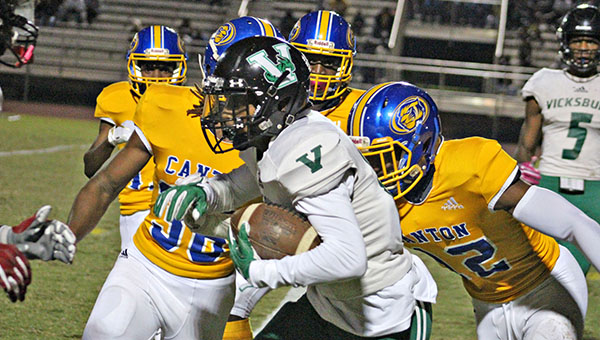 Vicksburg High’s Keveon Smith is tackled by Canton defenders Trevarius Body (58) and Damon Lewis (12) on a kickoff return. Vicksburg will go on the road again on Thursday to play Callaway in Jackson. (Ernest Bowker/The Vicksburg Post)

Based on the eye test, Vicksburg High is good enough to be contending for a playoff berth. The facts are the facts, however, and the Gators instead are heading into the last two weeks of the season playing for pride and the future.

Vicksburg (1-8, 0-5 Region 2-5A) will try to snap a seven-game losing streak when it takes on Callaway (4-5, 1-4) Thursday night in Jackson. The game is at South Jackson Field, located at Forest Hill High School.

During its skid, Vicksburg has lost three times when it has had leads or been tied in the fourth quarter. Head coach Tim Hughes said that level of competitiveness is encouraging, but only to a point.

“It’s a two-edged sword. It keeps you motivated, because you do see it and you know that they’re fighting and the kids themselves say this is something that can happen,” Hughes said. “But it’s frustrating for the kids and it’s heartbreaking for me, for them. I just want them to experience that success. We’ve got to continue to put in that work and believe that we’re going in the right direction and believe in what we’re doing.”

The Gators were one yard away from ending their losing streak last week against Canton. Holding a three-point lead with under two minutes to go, they were unable to convert a third-and-1 from their own 29 and elected to punt. A bad snap gave Canton the ball at the 12-yard line and led to its game-winning touchdown with 42 seconds remaining, as the Tigers won 37-33.

The disastrous finish negated perhaps the Gators’ best performance of the season. They finished with 312 rushing yards — running back Cedric Phillips had 218 and two touchdowns on 26 carries — and had nearly 400 yards of total offense.

The defense allowed 30 points or more for the fourth game in a row, as well as some big passing plays. It did, however, get some stops in key situations. Canton twice settled for field goal tries after reaching the red zone in the fourth quarter. It made one and missed another. The miss came with 3:23 left and would have been the pivotal play in the game if not for the wild finish.

Vicksburg has had similar performances in other games. It rallied from 21 points down before losing to Benton (La.) in overtime, and let a lead slip away in the fourth quarter against Provine. A four-point halftime deficit against Cleveland Central turned into a 34-24 loss when the offense bogged down in the second half.

“We all know that we’re better than what our record says. We’ve continued to show that we can fight and that we can improve,” Hughes said. “Offensively, I think it (the Canton game) was a considerable improvement. As far as execution of the game plan and sticking to it, it might have been our best of the year.”

Finding the handful of plays to turn those losses into wins is one of the big goals as the Gators head into the home stretch. The loss to Canton officially snuffed out whatever long shot playoff hopes they still had, so now they’ll simply try to win a game or two.

Next week’s season finale against Holmes County Central (7-3, 4-1) will be a difficult assignment, but this week’s matchup with Callaway seems like a chance to end the slide. Callaway has lost four games in a row since winning four of its first five.

“You can look at three games where right now instead of 0-5 we could be 3-2, and now we’ve got a couple more that we can compete with,” Hughes said. “It’s about establishing that winning streak and establishing that you are good enough. You finish the year showing up against those two teams, regardless of not being able to play a playoff game, you feel comfortable about where you’re at and where you can move to.”