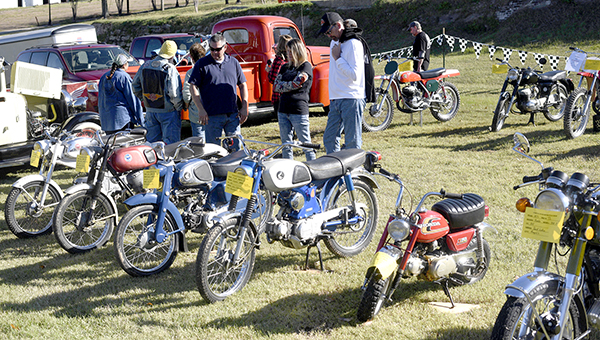 The event, which will be held at Washington Street Park from 9 a.m. to 3 p.m., will be an attraction for not just motorcycle enthusiasts, but lovers of historic vehicles in general.

“This show is shaping up to be the biggest and best yet,” Harris said.“Vintage motorcycles are a hobby for collectors, restorers and investors alike.”

They are also a way to rekindle one’s younger days.

“People remember their youth when they had that Honda 100,” Harris said, and they also enjoy having one just like it later in life.

And while it may be fun to own a motorcycle of one’s youth, vintage motorcycles have become a hot commodity.

However, most investment-grade vintage motorcycles sell in the six-figure range, with the majority of older motorcycles costing less than $10,000.

Some of the favorites for collectors, Harris said, include the early Hondas from the 1960s and 70s. American motorcycles like Harley and Indian are considered great icons of Americana, he said, while vintage European motorcycles implied sophistication and refinement.

During Saturday’s event, Harris said, examples of motorcycles from all over the world will be on display.

Those participating will also be competing for more than 15 awards handed out during the event. Awards will include best of show, people’s choice and class awards.

Live music will be provided by the Blues Experience from noon until 2 p.m. and door prizes will be awarded throughout the event.