Gators rally from 17 down to beat Callaway 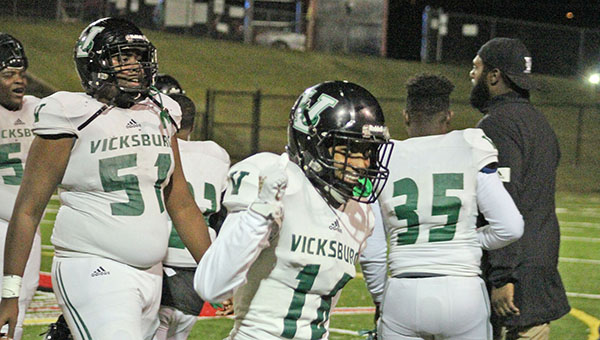 Vicksburg High wide receiver Terrance Johnson (16) celebrates at the end of the Gators’ 40-30 win over Callaway on Thursday. Vicksburg rallied from a 17-point deficit in the second half to win and end an eight-game losing streak. Johnson scored the go-ahead touchdown in the fourth quarter. (Ernest Bowker/The Vicksburg Post)

JACKSON — With the clock ticking down late in the fourth quarter Thursday night, the Vicksburg Gators unleashed a play they’d been waiting two months to run — a kneeldown in the victory formation.

Vicksburg (2-8, 1-5 Region 2-5) scored 27 unanswered points in the second half to rally from a 17-point deficit. It was the fifth time Vicksburg has led a game or been tied in the fourth quarter this season, but only the second of those it has won.

“It’s not even the win — it’s the win — but it’s seeing what this is,” Vicksburg coach Tim Hughes said as he proudly watched his players celebrate in front of the school’s band. “They worked so hard and so much. They were down. They could have easily shut it down and quit. All they did was come back and try to make plays. They were diving all over the place, laying themselves out. It was amazing to see. It was like watching a team that was undefeated trying to make something happen. It was so fun to see them have that success. The heart that was breaking last week is just full of joy right now for the success that they’ve had.”

The Gators allowed more than 30 points for the eighth time in nine games, yet it was their defense that turned out to be the difference.

After Thaddeus Bishop scored on a 27-yard run to put Callaway ahead 30-13 with 8:41 left in the third quarter, Vicksburg did not allow another point. Callaway (4-6, 1-5) only gained 46 yards on its last three possessions, none of which advanced inside Vicksburg’s 30-yard line.

It was a stunning turnaround from the first 2 ½ quarters. Callaway had 339 total yards after Bishop’s touchdown run, and had scored on two long pass plays in the first half. Quarterback Wesley Corbitt connected with Cameron Yarber for a 47-yard score, and with Rodricus Magee for a 40-yarder.

Corbitt finished the game 9-of-17 passing for 168 yards, with two touchdowns and two interceptions. Bishop ran for 124 yards and one touchdown on 11 carries.

“I would love to say it was the scheme or something we made, but it was just a desire thing,” Hughes said of the defensive turnaround. “We got a couple of stops and they started believing in themselves. They were doing everything they should have been doing from the beginning, but they did it with heart. Once they started having success it was like, ‘Hey, let’s go fly around and have some fun.’ That’s what they did.”

The Gators did intercept Corbitt twice late in the first half, both times inside the red zone, to finally gain some defensive momentum. Once they started getting stops, an offense that was productive all night was able to begin the comeback.

Phillips scored on a 6-yard run to cut it to 30-20 with 5:57 left in the third quarter. Callaway was forced to punt for the first time on its next possession, and punter Sharman Holmes Jr. was unable to handle a low snap. Vicksburg recovered the fumble at the 9-yard line and, after a false start penalty, Regan ran for a 14-yard score.
The two touchdowns in two minutes cut the deficit to 30-26 with plenty of time remaining, and the Gators were suddenly back in the game.

“We made stops in the first half, we were just being inconsistent at times. That’s what halftime was. The only adjustment we made was to trust yourselves,” Hughes said.

Callaway punted again on its next possession, and the Gators got the ball at their own 19 at the start of the fourth quarter. A couple of nice runs by Phillips were mixed with some sharp passing by Regan as the Gators gained six yards or more on eight straight plays. The last was an 11-yard touchdown pass on a wide receiver screen to Terrance Johnson that gave Vicksburg its first lead of the game, 33-30, with 8:02 remaining.

Callaway’s next drive ended on downs in Vicksburg territory. Corbitt was sacked by Lonell Earls on a third-down play, then tripped up by Ramone Brown for a short gain on fourth-and-13.

The Gators quickly drove the other way, capping a six-play drive with Phillips’ 12-yard touchdown run with 1:26 to go to clinch it. They recovered a fumble on the ensuing kickoff for good measure, and were able to take two knees to run out the clock.

Regan completed 10 of 11 passes in the game, for 134 yards and three touchdowns. Two of the scores went to McCalpin, who caught seven passes for 114 yards.

Regan also ran for 109 yards and a touchdown, while Phillips had 16 carries for 118 yards and two TDs.

“It feels good. We haven’t had it in a long time,” Phillips said. “When we came together as a team, everything worked out.”