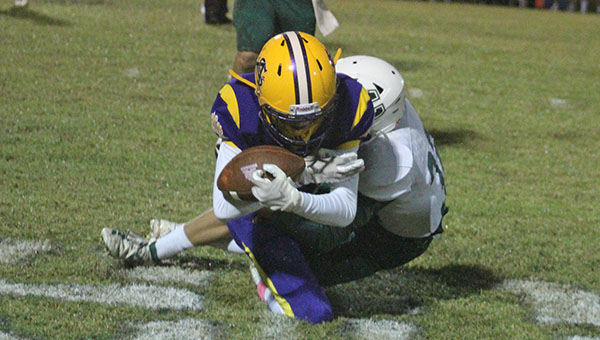 When scores started rolling in from across the state last Thursday, St. Aloysius coach Michael Fields had a suspicion that his team’s plans for the playoffs might have changed.

The 12 teams that made the final MAIS Class 5A bracket were already locked in heading into the final week of the regular season. A huge upset shuffled their order, though, and charted a slightly different path for the Flashes through the postseason.

Eleventh-seeded St. Al (5-5) will head to Natchez on Friday night to take on No. 6 seed Adams County Christian School (7-3). It’s a rematch of their District 3-5A game three weeks ago, and one Fields welcomed even if it wasn’t what he expected.

“After I found out that happened, I thought things would change,” Fields said. “The good thing about it is, we already have scouting reports, it’s not a far trip, and the kids are all familiar with them.”

ACCS’ flop in its regular-season finale stemmed largely from the absence of several injured starters. With a number of second- and third-stringers in the lineup, the Rebels committed five turnovers and were penalized 11 times in a 33-19 loss.
Fields did not expect a repeat of that performance.

“They’re going to be at full strength. They were just resting a few guys,” Fields said.
Fields also does not expect a repeat of St. Al’s last meeting with ACCS. When the teams played in Natchez on Oct. 11, ACCS stormed out to a 34-0 lead in the first half and went on to win 40-23.

Fields said the Flashes had some injury issues of their own in that game — leading rusher Alvin Brown, along with several other starters, did not play — and predicted a much more competitive game this time around.

“We’re not as injury hit as we were then. We’ve got some guys back that were out,” Fields said. “They bullied us up front. If you can’t win up front you don’t have a chance, and we had a few kids missing up front.”

Brown has 1,174 rushing yards and 13 touchdowns this season. With him back in the lineup, St. Al won its last two games. They lost the previous two, when he did not play or was extremely limited.

Brown finished with 175 yards and five touchdowns on a season-high 38 carries in last week’s 35-18 win over Cathedral.

“Alvin didn’t play against either team. He played two series against Silliman and didn’t even make the trip to ACCS. Our kids rally around him,” Fields said.

Another quirk of ACCS dropping to the No. 6 seed is that it sets up a mini tournament among District 3-5A rivals. Three teams from that league made the playoffs — St. Al, ACCS and district champion Silliman (8-2) — and they form their own quadrant of the bracket.

The winner of Friday’s game will advance to play Silliman in the second round next week. Silliman received a first-round bye.

“It was kind of weird,” Fields said of the way this portion of the bracket is arranged. “The good thing is, you’re playing teams you’re familiar with. I think it’s a favorable matchup for all three of us.”