Warren Central hosts No. 1 Starkville with a chance at Region 2-6A title 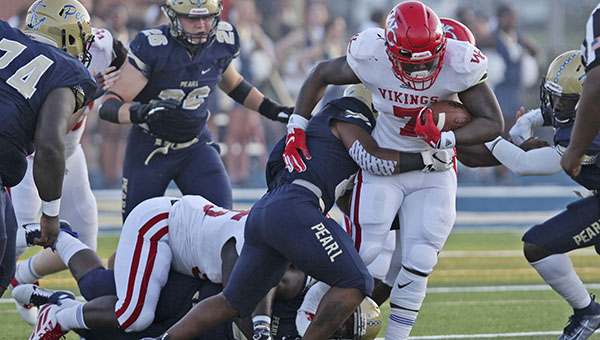 Warren Central's Malik Sims (7) fights for extra yardage earlier this season against Pearl. Warren Central will play No. 1 Starkville on Friday, and can move into first place in Region 2-6A with a victory. (Courtland Wells/The Vicksburg Post)

Things change fast in Region 2-6A. How fast?

Two weeks ago, Madison Central was undefeated and a unanimous No. 1 in the Associated Press Overall and Class 6A poll. Now it is the only team in the top half of Region 2-6A that hasn’t clinched a playoff berth.

Last week, Warren Central was fighting for its postseason life in a dogfight with Clinton, where a bad break or single play might have kept it out of the playoffs. This week, the Vikings have a chance to win the region championship.

Warren Central (6-3, 4-1 Region 2-6A) will play the top-ranked team in Mississippi for the second time this season when Starkville (8-2, 5-0) comes to town. It’s a showdown for the Region 2-6A championship and the latest in a long line of big games among the league’s heavyweights.

“We’re coming off a big and emotional win and setting ourselves up for another big game. We’ve put ourselves in a good spot,” Warren Central coach Josh Morgan said. “It’s about continuing to get better. We go from having to win and get in, to having the possibility of winning the district. We just have to be prepared to take advantage of the opportunity in front of us.”

Warren Central and Starkville, as well as South Panola, have clinched playoff berths in Region 2-6A. Madison Central can get in with one more victory or a Clinton loss.

Warren Central and Starkville, however, are the only two teams that control their path to the region championship. Starkville can clinch it with a victory Friday night. Warren Central needs to beat Starkville and South Panola in next week’s regular-season finale.

The down side for Warren Central is that it’s almost in an all-or-nothing situation. If it wins its last two games, it will win its first region championship since 2004. If it loses either game it is likely to drop to the No. 3 or No. 4 seed because of head-to-head tiebreakers.

Morgan quickly surrendered when he tried to sort through the various scenarios that could play out over the next two weeks. The one that matters, he said, is the best — and it happens to be the one the Vikings control.

“You couldn’t be in a better spot. We can’t get into that. We’re going to have to play really good and all of our focus is on our preparation and making sure we’re playing our best,” Morgan said. “We’re playing meaningful football into November and we’re able to control our own destiny. We just have to keep chopping wood.”

Winning the last two games is, of course, harder than just hoping it happens. The last two games of the season also happen to be against the Nos. 1 and 2 teams in this week’s Mississippi Associated Press Class 6A poll.

Starkville has won seven games in a row since losing two of its first three. It is averaging 36.9 points per game, and quarterback Luke Altmyer has thrown for 2,000 yards and 22 touchdowns. The defense has 25 takeaways.

“They’re good as advertised,” Morgan said. “Offensively, their quarterback is very, very good. He’s got some great weapons at receiver. They throw and catch as good as anybody we’ve seen. Defensively, they’re very aggressive.”

Warren Central, meanwhile, has won four of its last five games and is closing in on a winning season despite scoring just 17.8 points per game. Its defense has posted two shutouts, and hasn’t allowed a touchdown in its last nine quarters.

The Vikings also have a habit of playing Starkville tough. The Yellow Jackets have won four of the last five meetings, including three by double digits, but three of those were highly competitive games into the fourth quarter.

Starkville’s last visit to Viking Stadium, in 2017, resulted in a 23-0 loss — the only time this decade it has been shut out.

“I think our kids approach them with the mindset that we can win, and it starts there,” Morgan said of WC’s resilience against Starkville. “I think we match up well. We’re still getting better. Our best is yet to come.”