No. 1 Starkville scores 44 points in second half to beat Warren Central 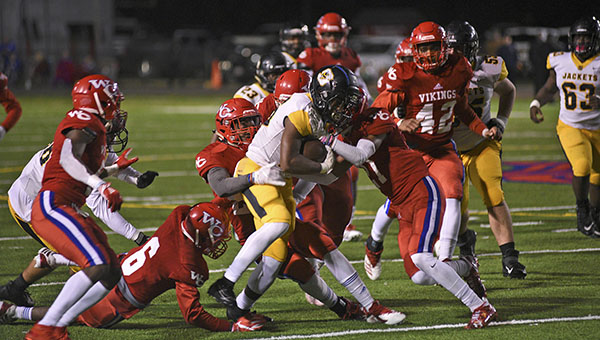 Two quarters of magic and dreams was all Warren Central had in the tank on Friday.
Luke Altmyer threw for 296 yards and five touchdowns, including four in the second half, as top-ranked Starkville scored 44 points in the last two quarters to beat Warren Central 50-24.

Starkville (9-2, 6-0 Region 2-6A) clinched the Region 2-6A championship. Warren Central (6-4, 4-2) had already clinched a playoff berth, and will go on the road to face South Panola in the regular-season finale hoping to still earn the No. 2 seed and a home playoff game.

“We’ve been here before. It wasn’t the outcome that we wanted. There’s things, just like everything else that’s negative or bad that’s happened to us, that we’ll learn from and hopefully be able to move on from,” Warren Central coach Josh Morgan said. “A lot of that credit goes to (Starkville). They’re a really good and extremely talented football team. There’s also some things we’ll hopefully get fixed up before we get into the playoffs.”

Friday’s victory was Starkville’s fifth in the past six meetings with Warren Central. Four of them have been by double digits, but this was also the fourth time it entered the fourth quarter as a one-score game.

Warren Central took the lead in the first quarter on a 73-yard touchdown pass from Parker Kivett to Demond Patton, added a field goal in the second quarter, and then extended the lead on a miraculous play to end the half.

Jaylin Thompson blocked a 45-yard field goal attempt by Starkville’s Peyton Rodgers, then scooped it up and returned it 50 yards for a touchdown and a 17-6 lead.

“We came in and it was silent,” Altmyer said of the scene in Starkville’s locker room at halftime.

A game that had turned 180 degrees on WC’s first touchdown, soon shifted back the other way just as quickly.

In a six-minute span of the third quarter, Altmyer threw two touchdown passes and led a third quick scoring drive capped by Keyshawn Lawrence’s 3-yard run to erase the 11-point deficit and give Starkville a 27-17 lead.

Kivett and Patton hooked up for another long touchdown pass — this time an 80-yarder — on WC’s next play, but the jolt was short-lived. A long kickoff return set up a 7-yard TD pass from Altmyer to Rufus Harvey 45 seconds into the fourth quarter to put Starkvile back up by 10 points.

Kivett was intercepted by Jamori Evans on Warren Central’s next possession, and Evans returned it 65 yards for a touchdown. Altmyer and Harvey hooked up for another touchdown, this time from 18 yards, to make it 50-24 with 4:34 remaining.

The Yellow Jackets also recorded a safety when a snap slipped out of the hands of WC punter Josh Griffin and out of the back of the end zone.

Altmyer finished the game 25-of-34 passing for 296 yards and five touchdowns. Harvey caught eight passes for 101 yards and two touchdowns. Amariyon Howard ran for 105 yards and caught a TD pass.

Starkville also converted six of seven third downs in the second half. Four of its five second-half touchdowns were scored on third down.

“We couldn’t get the ball moving and they converted some third downs that were just really crucial and in the crucial moments of the game,” Morgan said. “It was a screen play, it was a quarterback scramble, it was something where we had everything covered and then they found a Plan B or C and we didn’t have an answer for that.”

Warren Central, meanwhile, struggled all night on offense. Kivett was 13-of-26 passing for 236 yards, and Patton caught five passes for 182 yards. A lot of that yardage, however, came on the two long touchdown passes. The Vikings rushed for just five yards on 30 carries as a team. They had more three-and-outs (five) than first downs (three) in the second half.

“The only thing I can say is we pumped up too early. We probably needed to reserve our energy. We were fired up the first half. We came back out and tried to do the same thing, and it just didn’t happen,” Patton said.