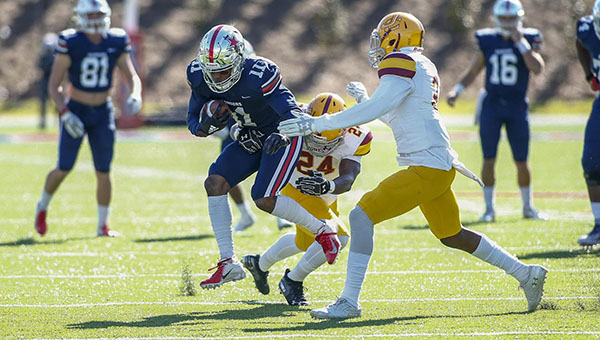 One dynasty faltered, but another remained alive Saturday in the Mississippi Association of Community and Junior Colleges football playoffs.

A 38-yard touchdown pass from Jack Walker to Mack Martin III and a 36-yard field goal from Cole Catalano helped No. 10 Northwest Mississippi to a fourth quarter rally in its 24-17 victory against No. 7 Jones College in the MACJC Semifinals.

Northwest (8-2) earned its fourth trip to the MACJC championship game in the last five seasons. It will host No. 1 Mississippi Gulf Coast, which routed three-time defending state champion East Mississippi 31-7 in the other semifinal.

The championship game is Nov. 9 in Senatobia. The time has not been announced.

In Saturday’s semifinal, former Warren Central star Fred Barnum threw a 55-yard touchdown pass to Natorian Watts to give Jones a 17-14 lead with 2:20 left in the third quarter.

Walker, however, tossed the 38-yard touchdown pass to Martin to put Northwest Mississippi back in front with 9:18 left in the fourth quarter, and Catalano’s 36-yard field goal with 3:03 to go extended the lead to 24-17.

Jones (7-3) got the ball back and drove inside Northwest territory as it tried for the tying touchdown. On third-and-13 from the Northwest 33 with a minute to go, Barnum was intercepted in the end zone by Christian Cain and Northwest ran out the clock.

Barnum completed 16 of 29 passes for 194 yards and one touchdown in the game, but was intercepted three times and sacked twice. All of his interceptions came in the fourth quarter.

Watts caught four passes for 107 yards and one touchdown.

Walker was 9-of-16 passing for 213 yards and two touchdowns for Northwest Mississippi.

Jaquerrious Williams ran for 97 yards and a touchdown on 19 carries, while Braden Smith caught seven passes for 164 yards and a TD.

No. 13 East Mississippi (6-4) had won the last three MACJC championships and five of the last eight NJCAA titles, but this season finished with its worst record in more than a decade.

East Mississippi’s only touchdown Saturday came on a 71-yard punt return by Zach Patterson in the first quarter.

“It was a well-executed plan,” Gulf Coast coach Jack Wright said. “You have to the kids a lot of credit for buying into the gameplan this week on both side of the ball. We knew exactly how we wanted to defend them, we knew exactly how we wanted to attack them, and the kids had a great week of practice. What you saw tonight was the result of a great week.”