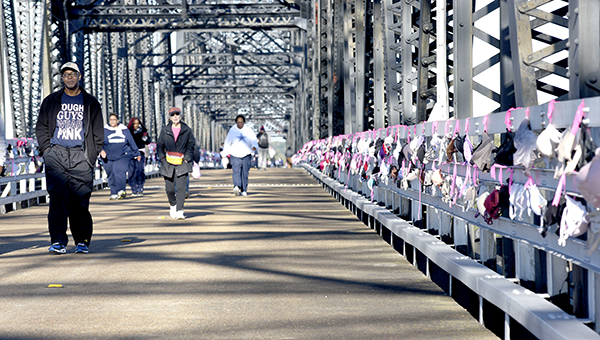 People walk along the Old Highway 80 Bridge during the 2019 Bras Along the Bridge event sponsored by Riverwalk Casino and Hotel. The 2019 event, which supports the American Cancer Society, raised more than $12,000. (Courtland Wells/The Vicksburg Post)

The Old Mississippi River Bridge was adorned with feminine beauty Saturday, and the Mississippi Chapter of the American Cancer Society is richer for it.

Riverwalk Casino’s annual Bras Along the Bridge Walk fundraiser drew a larger crowd of people who walked along the bridge than in years past. During the walk, participants admired the handiwork of casino employees who decorated the bridge with the more than 12,000 bras donated over the past few weeks.

“What we do is ask people in the community to send us their bras, show us they support what we’re doing,” Riverwalk general manager Ginny Tzotzolas said. “For every bra we collect, we send $1 to the cancer society

“On top of that, we take any bras that are new or in good condition and we donate them to women’s shelters across the state. We try to raise awareness for the program, and most of the program’s support comes from businesses and organizations that contact us for donation boxes for bras to be dropped off.

“This is one of our favorite events at Riverwalk; our team members really rally behind it and have a whole lot of fun with it. They decorate them so we have something pretty to put up.”

One group showed its support in person.

Team Candi, a group of friends and relatives of cancer survivor Candi Ameen, were visible in their pink T-shirts with legend “Team Candi”

Ameen said she has been cancer-free for four years.

“When I was diagnosed, my family was with me and supported me,” Ameen said. “I fought cancer and I fight MS (multiple sclerosis). I have a lot of families who have been affected by breast cancer and we walk for all of them. We know a lot of them who are gone, some still fighting; we’re there whenever they need us. It’s a rough journey.”

Wendy Hutchins with the American Cancer Society said some of the money will go toward research, adding, “Right now we have over $64 million invested in breast cancer research alone, so some of this money will go into that pot because were are looking for causes and cures every day.”

Most of the money, Hutchins said, will remain in the community to help provide rides for cancer patients to treatments and other medical appointments.

The money also supports the American Cancer Society’s free lodging program through the Hope Lodge in Jackson, a 32-room hotel where any cancer patient can stay for free if they are being treated for cancer and live an hour away from Jackson.

When Riverwalk held its first Bras Along the Bridge, Tzotzolas said, they collected less than 2,000 bras.

“We thought it was something fun. We tried it the second year, and it just took off; it kind of has a life of its own at this point,” she said.