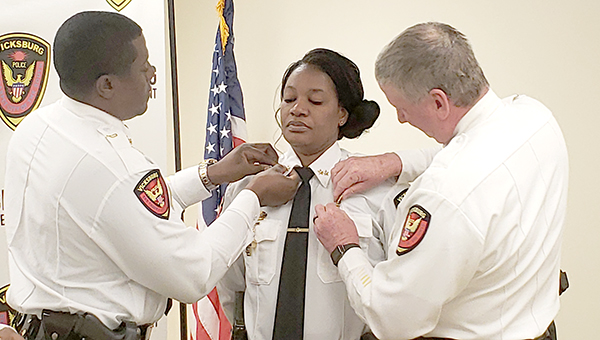 Penny Jones, a 20-year veteran of the Vicksburg Police Department, was sworn in Monday as the department’s third deputy chief and the first woman to command the patrol division.

Mayor George Flaggs Jr. administered the oath of office to Jones, who will be deputy chief over patrol, during Monday’s meeting of the Board of Mayor and Aldermen.

“I’m very elated and happy that the Board of Mayor and Aldermen chose to put me in such a position,” Jones said after the board meeting. “I’ve already been doing it, but it’s just got a little more responsibility.”

Jones received her chief’s stars at a special noon program at the police department.

“This is a very special occasion,” Moore said before Jones received her stars.

“Success is when preparation meets opportunity,” he said. “Deputy Chief Jones has been preparing herself for this opportunity for 20 years. She has shown her commitment, her dedication, and she is deserving of this promotion.

“Deputy Chief Jones has prepared herself; she has put in her work and she has built her foundation. I’m proud of her and lucky to be sharing this day with her as we all are,” he said.

Deputy chief-patrol is a new position created under Flaggs’ recent reorganization of the police department.

Besides supervision of the department’s four patrol shifts, Jones will be over the traffic and K-9 divisions, warrants, transport bailiffs and electronic monitoring and the domestic violence division, and will work with Stewart, who is deputy chief of operations and investigation on domestic violence cases.