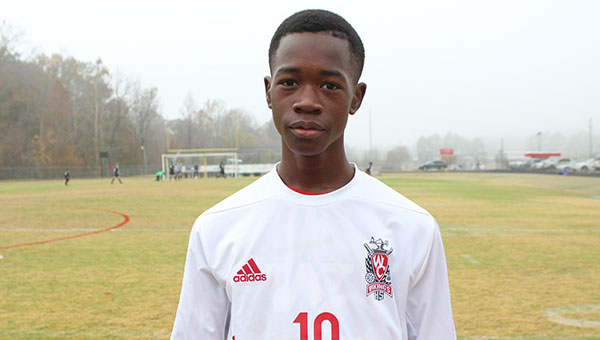 Warren Central soccer player DeQuarian Buck totaled three goals and one assist in a pair of wins over Raymond and Vicksburg on Saturday.

Warren Central’s boys’ soccer team had an impressive start to the 2019-20 season.

Tony King and DeQuarian Buck scored two goals apiece, and the Vikings’ defense did not allow a shot on goal as it beat crosstown rival Vicksburg High 7-0 in a season-opening classic game on Saturday.

Anden McClurg, Justin Hasty and Munir Shuaibi added a goal apiece, while Buck and Ian Gordon each had one assist. Warren Central outshot the Gators 20-0, with 13 of their shots landing on goal.

King scored twice, and McClurg and Buck once each in the first 14 minutes to give Warren Central a 4-0 lead.

The Vikings kept it rolling in the second half of Saturday’s doubleheader, as they took 25 shots and shut out Raymond 7-0.

King and Buck scored goals 90 seconds apart in the first 7 ½ minutes, and King added another in the 12th minute to stake the Vikings to a 3-0 lead. Weekly scored in the 17th and 21st minutes, and Shuaibi in the 25th to extend the lead to 6-0 at halftime.

Polk scored three goals in the 8-0 win over Raymond. Gloria Hall, Natalie Greer and Maddie Watkins each had a goal and an assist, while Aryn Greer and Laney Schrader had one goal each. Abby Claire Fuller had one assist.

In the Lady Vikes’ other game, Polk scored three more goals as they beat Vicksburg 9-0.
Schrader and Aryn Greer scored two goals apiece, while Natalie Greer and Cassidy Lampkin netted one. Maddie Watkins had two assists and Fuller had one.

Warren Central will return to action Saturday at the Laurel Tournament.