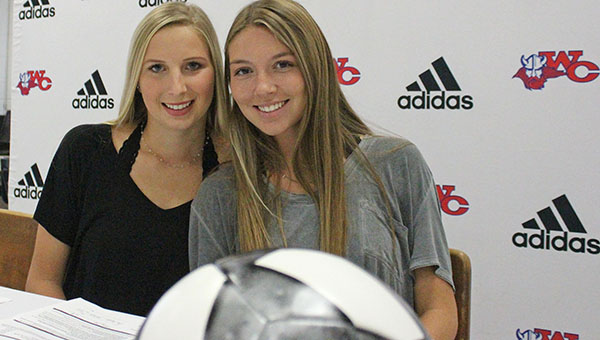 Over the past few years, Warren Central has scattered a number of soccer players across the landscape of the Mississippi Association of Community and Junior Colleges.

On Friday, it sent two more that way.

Watkins, a midfielder, is a four-year starter for Warren Central. She has 13 goals and 12 assists in her high school career, and is off to a great start this season. In two season-opening classic games Saturday she totaled one goal and three assists as the Lady Vikes beat Raymond 8-0 and Vicksburg 9-0.

Watkins said she was glad to sign early, and not have to worry about finding a landing spot as the season progressed and college rosters started to fill.

“I do not have to stress. I wanted to commit before my senior year so I didn’t have to worry and go down to the last minute trying to figure out where to go,” Watkins said.

Polk, meanwhile, is starting her second and final season at Warren Central after transferring from St. Aloysius. She has scored 93 goals in her high school career — 76 at St. Al and 17 at Warren Central — after tallying six in Saturday’s wins over Raymond and Vicksburg.

Polk led the team with 11 goals last season, but despite her prolific offensive production said early indications are that she’ll play as a defender for Holmes.

“In college if they tell you to go somewhere, you have to go play that position,” Polk said with a laugh.

In the meantime, she’ll enjoy the pursuit of the 100-goal milestone as she closes out her high school career. She said she was fired up to get a chance to continue her soccer career.

“I love it. I’ve been playing since I was 3 years old. I went to select, then came here and played high school, and to go there (to Holmes) is a big deal to me,” Polk said. “They’re state champions this year, so I feel good about it. I’ll be hanging out with a lot of girls I know, so it won’t be weird or anything. And then it’s a really good school, in athletics and academics.”