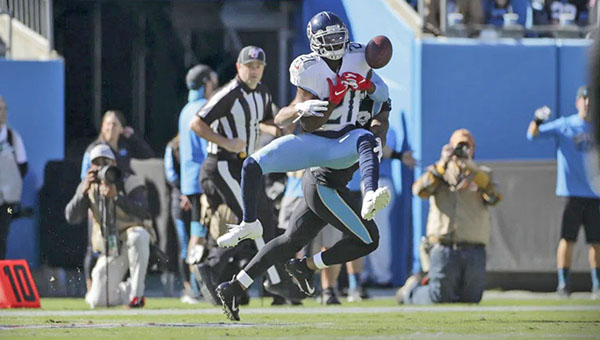 Tennessee Titans cornerback Malcolm Butler (21) breaks up a pass during Sunday’s game against Carolina. The Vicksburg native was put on injured reserve on Tuesday with a wrist injury he suffered late in the first half. (Donald Page/The Tennessee Titans)

NASHVILLE, Tenn. (AP) — The Tennessee Titans have placed cornerback Malcolm Butler on injured reserve after he injured his left wrist Sunday against the Carolina Panthers.

The Vicksburg native was injured when Carolina’s Curtis Samuel landed on his arm while making a touchdown catch late in the first half in Tennessee’s 30-20 loss.
On the CBS broadcast, trainers were shown holding Butler’s left wrist in place as he went to the locker room.

The Titans announced in the second half that Butler would not return to the game. NFL Network reported after the game that Butler suffered a broken wrist. And on Monday, Titans head coach Mike Vrabel said “that’s a possibility” when asked whether Butler could miss the remainder of the season.

Under NFL rules, players must spend a minimum of eight weeks on injured reserve before they are eligible to return. With only eight games left in the regular season and the Titans (4-5) on the fringe of the AFC playoff race, the move means Butler likely will not play again this season and will at least be out for the rest of the regular season.

“Malcolm’s probably not going to make it this week,” Vrabel said of Butler’s status ahead of the Titans’ Week 10 game against the Kansas City Chiefs (6-3). “So, I would say probably not good.”

The Titans signed the Vicksburg native and former New England Patriots defensive back in March 2018 to a five-year deal worth more than $60 million, including more than $30 million guaranteed.

In nine games this season, Butler was credited with 30 tackles, 10 passes defensed and two interceptions, including one he returned for a touchdown in the season opener against Cleveland. The Titans rank seventh in the NFL in scoring defense this season, giving up 17.8 points per game.

“Just heartbroken for him,” Titans cornerback Adoree’ Jackson told USA Today. “The passion that he plays with, the guy that he is. … It hurts me, but we’re going to be out there trying to help him out, keep his spirits up. I know he’s going to do the same with us. … But that’s a valuable piece to the team.”

Smith has played in 19 games for the Titans, including four this season, and has made three special teams tackles. The Titans had waived him on Saturday.