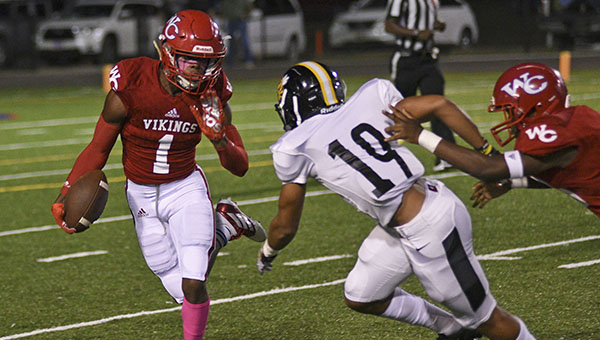 You’re in Four Down Territory. Each week we’ll highlight four notes, stats or trends from the weekend that was in Mississippi high school football, college football, and the NFL.

Demond Patton has developed into a reliable No. 1 receiver for Warren Central, and was quietly having a pretty good season.

Quiet, at least, until Friday night.

Patton caught two long touchdown passes — a 73-yarder in the first quarter and an 80-yarder in the third — in the Vikings’ 50-24 loss to No. 1 Starkville. He finished with a career-high 187 yards on five receptions, and showed that he’s more than just a guy who can move the chains.

“It’s just trying to make plays for my team. That’s all it is. When my name gets called, I’ve got to make a play and my coach trusts me and that’s why he calls my name. I just execute the play,” Patton said.

Patton has caught at least one pass in each of his last 18 games, going back to last season, and has at least two receptions in every game this year. He hadn’t really been a big-play threat, though. Friday marked his first 100-yard game. His previous high for receiving yardage was 72, earlier this season against Greenville.

He surpassed that on one play against Starkville. With the Vikings trailing 6-0 late in the first quarter, Patton got wide open behind the defense and caught a long pass from quarterback Parker Kivett before running the last 40 yards untouched to the end zone.

In the third quarter, with Starkville leading 27-17, Patton caught a 15-yard pass, shook off his defender, and ran up the left sideline for an 80-yard touchdown.

Both big plays gave the Vikings a jolt. The first helped spark them to a 17-6 lead against the No. 1 team in the state, while the second provided a brief shot of adrenaline before Starkville pulled away in the fourth quarter.

With at least two games left in the season — this week’s regular-season finale at South Panola and at least one playoff game — Patton has put himself in position to make some history.

Patton is also Warren Central’s career receptions leader with 77 — he broke Shaun Walton’s mark of 69 set from 2014-16 earlier this season — and is closing in on the yardage record as well. Patton has 1,296 yards over three varsity seasons, leaving him just 13 short of breaking the record of 1,308 set by James Jones from 1991-93.

“He’s just a phenomenal player who has really become our leader. He’s done a good job. He’s doing what we ask him to do and been a really big impact player for us,” Warren Central head coach Josh Morgan said. “He’s definitely dangerous and he’s really starting to get that confidence. And he’s still not reached close to his ceiling, so he’s got a really big upside.”

After an uneven start, Vicksburg High running back Cedric Phillips has put together a memorable season.

The senior ran for 118 yards and two touchdowns on 16 carries in a 40-30 win over Callaway on Thursday, giving him 1,181 yards and nine touchdowns for the season.

After being held to 90 yards total in early-season losses to Madison Central and Warren Central, Phillips has rushed for more than 100 yards seven times this season — including each of the last four games — and is the first Vicksburg player to top the 1,000-yard mark for the season since Darius Youngblood in 2011. 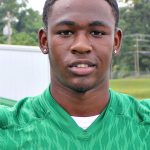 Vicksburg head coach Tim Hughes said Phillips has also played most of the year with a broken finger suffered in the first half against Benton (La.) on Sept. 13.

“Ever since the Benton game he’s been wearing a cast on his finger, so everything he’s done in district — which is a pretty good resumé — he’s done with that,” Hughes said. “He’s had an amazing year. People were expecting a lot out of him. He didn’t falter. He didn’t buckle under any pressure. He came out and delivered game in and game out.”

The Gators (2-8, 1-5 Region 2-5A) will finish their season Friday at home against Holmes County Central.

Northwest Mississippi and Mississippi Gulf Coast will play for the MACJC championship after winning their respective state semifinals on Saturday.

Top-ranked Gulf Coast (10-0) definitively ended No. 13 East Mississippi’s dynasty with a 31-7 rout in Perkinston. The Bulldogs held East Mississippi to 250 total yards and no offensive touchdowns — the Lions’ only score came on a 71-yard punt return by Zach Patterson in the first quarter — while forcing four turnovers.

East Mississippi (6-4) had won the last three MACJC championships and five of the last eight NJCAA titles, but this season finished with its worst record in more than a decade.
Northwest Mississippi (8-2), meanwhile, earned its fourth trip to the state title game in five years by beating Jones College 24-17.

Jack Walker threw for 213 yards and two touchdowns for the Rangers, including the go-ahead score on a 38-yard pass to Mack Martin III with 9:03 left in the fourth quarter.
Jones quarterback Fred Barnum, a former Warren Central star, was 16-of-29 passing for 194 yards and one touchdown, but threw three interceptions — all in the fourth quarter — and was sacked twice.

Jones finished the season with a 7-3 record and made its third consecutive appearance in the state playoffs.

4
Mississippi State snapped a four-game losing streak and set a slew of school records in its 54-24 win over Arkansas on Saturday.

The Bulldogs piled up 460 rushing yards and 640 yards of total offense, both of which were single-game records against a Southeastern Conference opponent.

Running back Kylin Hill had 198 rushing yards in the first half, which was a record for most yards in a half. His 234 yards were the fifth-highest single-game total in school history. On Monday he was named the SEC Offensive Player of the Week.

Nick Gibson also had a career-high 129 yards, marking the first time in program history that Mississippi State has had two running backs finish with more than 200 and 100 yards. It’s the third time MSU has had two players, including quarterbacks, with 200- and 100-yard games.