ELECTION RECAP: Warren County Board of Supervisors will look different next term 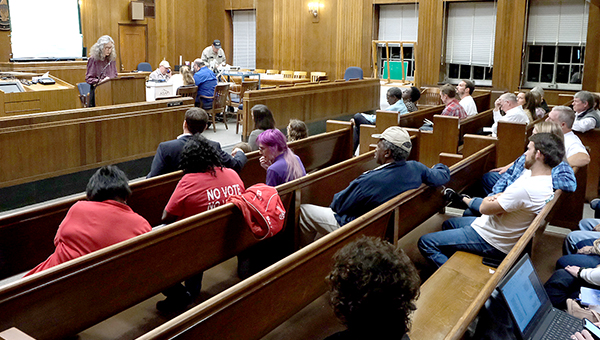 When those who won Tuesday night in the general election are sworn in, the look of the Warren County Board of Supervisors will be completely different.

During August’s party primaries and runoff, two of the sitting board members were defeated. During voting Tuesday, two others saw their re-election bids come up short.

A wave that started in the party primaries in August continued Tuesday as another incumbent on the Warren County Board of Supervisors was unseated.

In the race for the District 1 seat on the Warren County Board of Supervisors, incumbent John Arnold was defeated by Ed Herring. Unofficial results Tuesday evening gave Herring a 926-vote victory.

“I feel really good. It’s been a lot of work and a lot of help from a lot of people,” Herring said. “It’s been a good night.”

Herring lost to Arnold in the 2015 general election for District 1 supervisor.

Arnold was surprised by the size of Herring’s win.

“I am surprised that it was that big of a gap. I thought it would be closer,” Arnold said. “But, that is what elections are for. They are for people to elect people to represent them”

Arnold said he congratulated Herring and offered his help in any way.

“He will do a good job. He will provide good representation to the district,” Arnold said. With all of the boxes reporting, Herring received 1,985 votes to Arnold’s 1,059 votes. The unofficial totals do not include absentee votes. In District 1, a total of 208 absentee ballots were received.

With the Warren County Board of Supervisors assured to welcome a majority of new members next year, William Banks will bring experience back to the board.

In unofficial results, Banks earned just over 60 percent of the vote.

“I had plenty of confidence I was going to win because I have been doing my job all the time, and the people always told me that as long I was doing a good job they had no problems with me,” Banks said. “I am going to continue to work for (District 2 residents). I am dedicated to doing my job and I will always be working to do the best of my ability to make the best decisions possible to move District 2 forward.”

As for the change to the make-up of the board, Banks said his experience will be an asset to those joining the board. Ed Herring in District 1, Shawn Jackson in District 3 and Kelle Barfield in District 5 all were elected for the first time Tuesday..

“With the new supervisors it looks like I would be the most experienced one and I plan to help them as much as I can,” Banks said.

With all of the boxes in his district reporting, Banks received 1,448 votes, compared to Collins’ 623 votes. Those vote totals do not include absentee votes.

A message left for Collins Tuesday evening was not returned.

Shawn Jackson had to go three rounds to earn her spot on the Warren County Board of Supervisors.

That final round came Tuesday when she defeated David Sharp in the general election for the District 3 seat.

Jackson made it through a party primary in August, and then a runoff against incumbent Charles Selmon. Her victory in that runoff earned her the spot in the general election.

“It feels surreal. I am ecstatic; I’m excited. I’ve been through three elections, this has been a full cycle,” Jackson said just moments after learning she was being declared the winner. “I am really happy the community supported my bid for supervisor. I’m ready to work.”

Jackson believes voters supported her because of a change in attitude among the Board of Supervisors.

“The Warren County community is ready to have ‘can-do’ elected officials who can deliver results,” she said.

As for Sharp, he congratulated Jackson and wished her the best on the board.

“I am very blessed to have so much support and love,” Sharp said. “This is the second time I have run for office. This keeps building character.”

Sharp’s motivation through the campaign was the students he teaches at the Academy of Innovation.

“I was mainly doing this because I told my students at one point in time that I would do it and I wanted to be a man of my word,” he said.

The results of the election are unofficial at this point.

With all the boxes reporting, Jackson earned 1,534 votes compared to Sharp’s 448 votes.

It took most of the night to declare a winner, but for Jeff Holland the results were well worth waiting for.

More than four hours after the polls closed Tuesday, Holland secured the win over Marty Crevitt for the District 4 seat on the Warren County Board of Supervisors.

After each of the precincts in District 4 had reported, Holland held a slim 46-vote lead over Crevitt. With 114 absentee ballots received from District 4 voters, a winner could not be declared without counting them.

“My gracious I did win,” Holland said after hearing he had earned enough votes to claim victory. “There is a sense of elation, but with absolute knowledge that people voted for this for a reason. They have expectations. We have things to do.

“I am not good at celebrating at times, but a lot of people worked for this to happen, and after they get done celebrating, it will be time to get to work.”

Crevitt had earned a spot in Tuesday’s general election by defeating incumbent District 4 Supervisor John Carlisle in August’s party primaries. Since Holland ran as an independent, he did not need to compete in a party primary.

“Both Marty and I were both interested in change,” Holland said, acknowledging the race between him and Crevitt was always going to be a close race. “I think we had a different vision of what that change should be and that difference in vision was perhaps the difference in the race.”

It came down to the final precinct reporting to make it official, but in the end, Kelle Barfield pulled out a convincing victory Tuesday evening, knocking off incumbent District 5 supervisor Richard George and fellow challenger Carl Campbell.

The unofficial totals gave Barfield a 748-vote victory over George, earning 57 percent of the vote in the district race.

In a brief comment after the results were announced, George said, “I’m done.”

Barfield said her election and the significant turnover on the Warren County Board of Supervisors is a sign of hope for the county. Barfield, Shawn Jackson and Ed Herring all won Supervisor seats for the first time on Tuesday. The District 4 race between Jeff Holland and Marty Crevitt was still too close to call, but both candidates were also running for a first term.

Barfield earned 1,853 votes compared to George’s 1,105 votes. Campbell earned 305 votes. The totals were unofficial and do not include absentee votes.

Harper earned 43 percent of the vote, recording 5,615 votes, which was an 1,865-vote margin over second place Johnson.