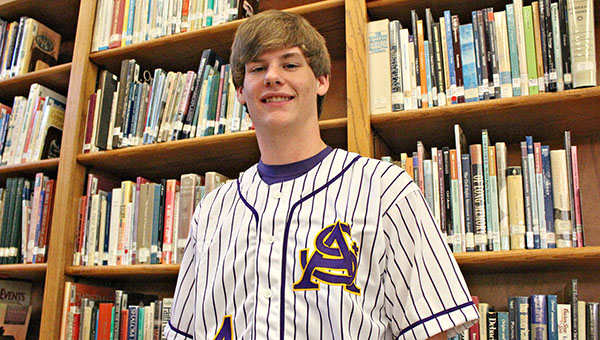 When he was younger, Haden Luke says he always looked up to his brother Chandler and wanted to excel in sports like he did.

So far, he certainly has.

“I looked up to my brother when I was younger. It really pushed me to work harder and do what he did. I’m just hoping to go and play as much baseball as I can,” Haden Luke said.

Haden started his high school career at Vicksburg High, but transferred to St. Aloysius in 2018 and had a breakout season last spring. He was one of the Flashes’ best pitchers, going 3-4 with a 2.65 ERA and 33 strikeouts in a team-high 39 2/3 innings pitched.

Luke also played second base when he wasn’t pitching.

“We’ve leaned on him, big time, especially last year,” St. Al coach Sid Naron said. “He threw some big games for us. I’m excited about his senior year. I think he has a chance to do some big things this year.”

Luke said Mississippi Delta was the only school that recruited him. He felt like he might have been able to get some more offers if he’d waited until the spring to sign, but didn’t want to pass up a sure thing at a program he felt comfortable at.

“It’s a great opportunity. I don’t think anybody else would have given me this opportunity if I’d waited, so I had to jump on it,” he said. “I was ready to jump on it, but at the same time I had decisions to make. Could I wait it out and wait until the season, or should I jump on this now and have a guaranteed spot? I jumped on it.”

Luke’s fastball clocks in around 85 mph, but Naron said that can be improved upon once he gets to college and focuses only on baseball. Besides playing for St. Al’s baseball team, Luke is also a starting lineman on the football team and the starting goal keeper for the two-time defending state championship soccer team.

“They’re taking that into consideration when they’re signing him,” Naron said. “They knew he hadn’t been focused on baseball all year round. With him focusing on baseball year-round, starting in the fall and getting stronger and developing as a pitcher, I feel like he’s going to be a guy that can contribute right away.”

Luke acknowledged he’s got some work to do in the weight room over the next year to prepare for the challenge of playing at the next level.

“I definitely need to get stronger and faster, for sure. If I don’t throw harder, they’re going to show me what college ball is like. It’s mainly strength and physical fitness,” he said.

For now, though, Luke is celebrating. He said he was thrilled to get an opportunity only a handful of players earn each year.

“It’s awesome. I’m blessed to have an opportunity to play at the next level,” Luke said. “I’m just thankful to everybody that’s helped me get to this point.”