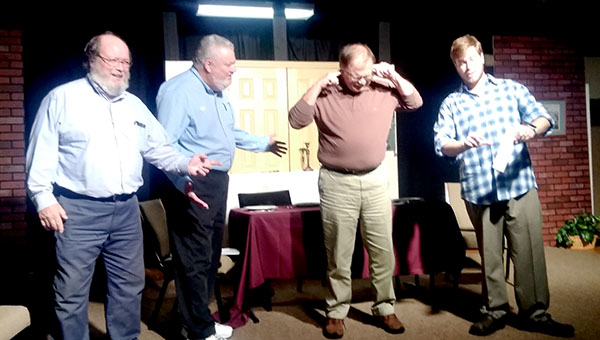 Rehearsing a scene from the play “A Visit From the Boss” for the Hawkins United Methodist Church dinner theater are, from left, Pete Dionne, the Rev. Tommy Miller, the Rev. Bob Ford and the Rev. Austin Hoyle. Not pictured are cast members Suzette Bettencourt and Wendy Oakes. The play will be presented at 6 p.m. Nov. 14, 15 and 16 at the church’s Abundant Life Center.

Hawkins United Methodist Church’s dinner theater presents “A Visit From the Boss,” a play with a biblical message, Nov. 14, 15 and 16 at the church’s Abundant Life Center, 3736 Halls Ferry Road.

The play begins at 6 p.m. Admission for the dinner theater and silent auction is $10 and includes the meal.

Proceeds from the program will benefit Beautiful Deliverance and Eagle Lake UMC flood relief. For more information, call the church at 601-636-2242.

Playwright Richard VanDenAkker said “A Visit From the Boss” is a story about a man named Riley Bendix, who thinks his boss coming for dinner, “But nothing goes right. A neighbor has a death in the family so they (Bendix’s family) have to send their dinner over there and they have nothing to serve.

“He then finds out his new suit was accidentally donated to the River City Rescue Mission and it’s league night and he’s supposed to be bowling.”

As Bendix is worrying about his situation, an elderly homeless man shows up at his front door wearing the new suit that was mistakenly donated.

“The derelict man, John Doe, comes in, and it turns out he’s seen some hard times and he tells his story,” VanDenAkker said. “Riley wants to take the suit back, and he’s got another suit to give him, but people only give away what they don’t need or want.”

Bendix then learns the man was close to committing suicide until he found the suit, and wondered who would give their best suit to a total stranger.

“There’s some surprises in the play and some curiosity as to who the man really was,” VanDenAkker said.

“That’s part of what comes out in the play; it’s about helping other people,” he said.

VanDenAkker said the decision to help Beautiful Deliverance and Eagle Lake UMC was made during a meeting of the church’s missions committee.

Beautiful Deliverance provides faith-based programs locally to help people overcome their addiction or helps place them in faith-based treatment programs in other states.

VanDenAkker said Eagle Lake UMC has been providing meals, access and supplies to volunteers working on flood cleanup in the Yazoo Backwater Area.