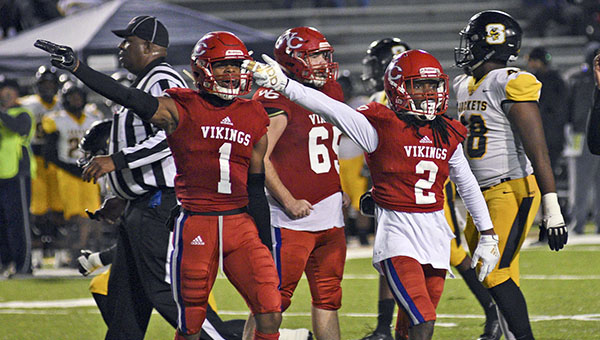 Warren Central's A.J. Griffith (2) and Demond Patton (1) point toward the end zone against Starkville last week. The Vikings will go on the road to play No. 2 South Panola in their regular-season finale on Friday. (Courtland Wells/The Vicksburg Post)

Even though only four of the 16 teams in the MHSAA Class 6A football playoffs have locked in their seeds, there is surprisingly little drama heading into the final week of the regular season.

Only two spots, both in Region 3-6A, remain up for grabs. Three of the four region championships have been decided. Twelve of the 16 seeds have yet to be settled, but a number of those require upsets and point differential tiebreakers to change the order.

Warren Central (6-4, 4-2 Region 2-6A) is among the teams that has clinched a playoff berth. It will likely be the No. 3 or 4 seed from Region 2-6A, depending on this week’s results, and either way will go on the road for a first-round game next week. It doesn’t have a lot to gain or lose Friday night against South Panola (10-1, 5-1), but that hardly means there isn’t something to play for.

“We want to win. That’s the main goal we’re going after,” Warren Central head coach Josh Morgan said. “We do want to be educated on what we need to do, and go into the playoffs with momentum. Everybody is going to have a tough game in the playoffs. It’s about momentum. Anybody can beat anybody, and we want to have that momentum going into the playoffs.”

South Panola is one of the most storied programs in Mississippi high school football history — its 89-game winning streak from 2002-08 is a state record — but has had some down years recently by its insanely high standards.

The Tigers have not won a playoff game since beating Oak Grove in the 2014 Class 6A championship game. They finished 7-6 in two of the last three seasons.

South Panola has come back with a vengeance this season, however. Its only loss was a 24-20 setback against top-ranked Starkville on Sept. 27. South Panola is ranked No. 2 in this week’s Mississippi Associated Press Class 6A poll and riding a five-game winning streak.

Running back Janari Dean leads the team with 1,108 rushing yards and 10 touchdowns, and quarterback Anterrio Draper had thrown for 1,486 yards and 21 TDs.

“People talk about their down years, but they’ve been consistently good. They still made the playoffs. They’re not down this year,” Morgan said with a chuckle. “Their dominant running game is the first thing that comes to mind. They’ve got the best back in Mississippi, and a couple that would be ones anywhere else, and all of them are running behind a dominant offensive line.”

South Panola also has a lot to gain this week.

South Panola would clinch the No. 2 seed from Region 2-6A and a home playoff game by beating the Vikings. A Warren Central win, however, would create a three-way tie between those two teams and Madison Central (8-2, 4-2).

Warren Central could also sneak into the No. 2 seed if it beats South Panola and Greenville (3-7, 1-5) upsets Madison Central. Greenville is 0-23 all-time against the Jaguars.

Who Warren Central would match up with is unclear. Oxford, Tupelo and Olive Branch will be the Nos. 1-3 seeds in Region 1-6A, but the order won’t be determined until Friday night. The net result of all the playoff scenarios is an odd arrangement where Warren Central has something to play for, but it doesn’t know exactly what that is or where it might play next.

The Vikings are also nursing some injuries that could use some rest. Morgan said balancing all of those considerations is difficult, but taking it easy for a week is not an option against a top-tier opponent.

“We need to get healthy. It’s a fine line when we still have the playoffs and still have a game we need to win. We want to use this week as a springboard and have a good showing,” Morgan said. “We have to do a good job and take care of our guys the best we can. We’re preparing to win, playing to win, and need to win. That’s the only way you can approach these games.”

ONLINE:
For full coverage and updates on Friday night, follow us at vicksburgpost.com, facebook.com/thevicksburgpost, and twitter.com/vixpostsports