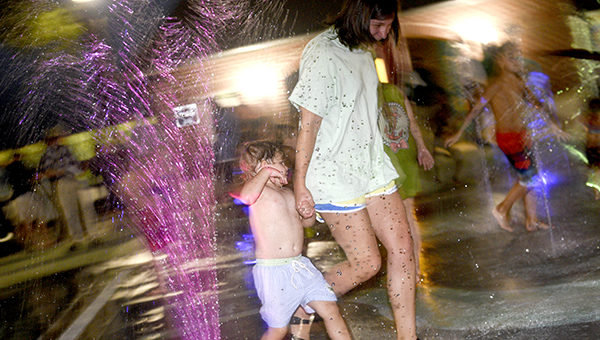 The city of Vicksburg could soon look at building a second splash pad in the city. The city is considering one near the community garden and airport on U.S. 61 South. (Courtland Wells/The Vicksburg Post)

The Board of Mayor and Aldermen Friday passed a resolution asking the state Department of Finance to issue the bond money, which was set aside for the city in the 2016 session of the Legislature for “paying costs associated with the recruiting, promotion, construction and/or development of tourism projects in the city.”

South Ward Alderman Alex Monsour, who was a state representative when the bonds were approved, was involved in getting the money set aside for the city’s tourism projects.

He said the money will be used to improve the city’s parking garages and build a small splash pad at the community garden site off U.S. 61 South at the Vicksburg Municipal Airport.

“This doesn’t come from our money,” he said. “This comes from the state general obligation bonds for us to fix the two parking garages: update them, paint them, fix the elevators where you have elevators running up and down.”

He said the new splash pad at the airport will be built so it can be expanded.

“Not only do we need to concentrate on recreation and projects like that downtown,” Monsour said, “We’re going to expand out to the south end of town, on 61 South.”

The new splash pad, he said, “Will take some of the heat off this one downtown.”

He said the board will look at other projects for other areas of the city, adding the improvements funded by the bond money “helps make Vicksburg better; makes it a place where people can go out and do recreation, stay busy and that’s the kind of things we want to invest in the city of Vicksburg.”