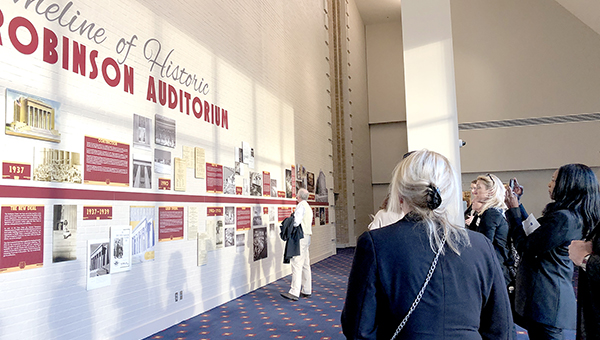 LITTLE ROCK, Ark. — City officials made an overnight visit to Little Rock earlier this week in hopes of bringing some good ideas back home.

The trip, which the city described as a “familiarization tour,” consisted of nine meetings where Vicksburg officials, real estate agents and developers, engaged volunteers and business owners could ask questions, brainstorm and understand new ideas. The trip took place Wednesday through Thursday.

Other meetings included information about how the City of Little Rock deals with community outreach and crime prevention, human resources, economic development efforts and managing a public transit trolley system.

Vicksburg Mayor George Flaggs Jr. called the visit a “success” in the city’s board meeting Friday and reiterated the importance of going on visits like these to expose city officials, residents and volunteers to other communities and the way they operate.

“We led a delegation to Little Rock, Ark. to learn about their best practices on their riverfront, economic development and tourism and city management,” Flaggs said. “City leaders were willing to share their strengths, challenges and funding sources … I look forward to seeing how we can implement some of this success in Vicksburg as we move this city forward.”

“He said Little Rock was doing some amazing things and we needed to talk to them about their riverfront and transformation of their downtown,” Strickland said. “Our main focus was how to capitalize on the huge asset of having a river going through our community, so a lot of the agenda was around tourism and development of the riverfront, and many of the delegates who went on the trip are interested in trying to grow and capitalize on that asset.”

Outside of riverfront development, some of Strickland’s takeaways from meeting with counterparts in Little Rock included research, camaraderie and hospitality training.

“Everything they do is very research-based,” she said. “They listen to their audience and think about how decisions are going to affect them years from now. It was very apparent to me that everyone understands tourism and they know how important it is and that it is what has allowed them to grow.”

Strickland was also impressed that Little Rock offered quarterly hospitality training for their staff and hopes to implement something similar in Vicksburg that could be used by Vicksburg Convention and Visitors Bureau staff, city ambassadors and even community residents.

Tour attendee and Downtown Vicksburg Main Street board member Debbie Haworth said she and other members of the board who took part in the trip came back to Vicksburg with “a lot of good energy and fun ideas.”

“When you go to cities like Little Rock that are doing so much, it opens your mind up to the possibilities,” Haworth said. “(Main Street Director Kim Hopkins) and I have talked about adding several events that we learned about while there, as well as building on our own.”

“The visit was all about discovery,” Wooten said. “But the aspect I took away was the number of recreation and quality of life outdoor scapes that Little Rock offers its residents.”

During the visit, attendees were shown numerous bike paths, walking trails, pedestrian bridges, parks and forms of public art that span 11 blocks in downtown Little Rock and are part of an area called Riverfront Park. The area also features an outdoor amphitheater and electric scooter and bike rentals that cater to the average Little Rock resident, who is age 34.

“As a realtor and developer, what I was concerned with was the number of retail stores, vacancies, rentals and what the city looked like,” Wooten said. “The buildings we saw were nowhere near as pretty as ours. Our buildings are very architecturally beautiful and historic. When you go to our downtown, it’s the architecture that wows you. If we can couple that with what they did in their outdoor scapes, in my opinion, we would have a better product than they do.

“If the city and county will put in the parks, we’ll attract developers to our city. When you have those recreation and quality of life outdoor scapes, your developers will come. Everywhere we went, the focus was on quality of life and enhancements that the city felt like were important to retain people and get more young people to live there.”

Vicksburg Convention Center Executive Director Annette Kirklin said the visit will help her and others who work on projects for the city look at event execution in different and creative ways.

“I felt so appreciative to be a part of the group,” Kirklin said. “The visit spurred imagination. It was extremely informative and I look forward to using what we learned to make Vicksburg more amazing.”