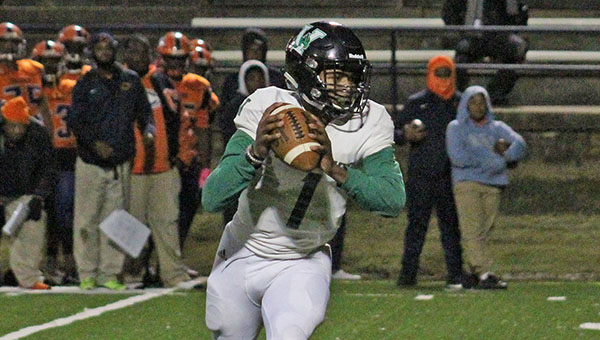 Vicksburg High quarterback Sha’Kori Regan (1) has thrown for more than 1,000 yards and run for more than 600 this season. He and the Gators will finish the 2019 season Friday at home against Holmes County Central. (Ernest Bowker/The Vicksburg Post)

The final football game of 2019 at Memorial Stadium will be, in effect, a glorified exhibition.

The Vicksburg Gators (2-8, 1-5 Region 2-5A) were eliminated from playoff contention several weeks ago. Holmes County Central (8-3, 5-1) is locked in as the No. 2 seed from Region 2-5A and will host a first-round game in the MHSAA Class 5A playoffs next week no matter the outcome.

For the coaches looking for a bounce heading into the offseason, however, and the seniors playing what might be the final organized football game of their lives, it’s still one last chance to generate positive momentum and memories.

“It’s not to say there’s not anything to play for. To be the last game of the season, you’ve got senior night, and for these guys it’s going to possibly be the last time they get to strap it on. Just on that end of it, it’s obviously going to mean a lot,” Vicksburg head coach Tim Hughes said.

The 2019 season has been a frustrating one for Vicksburg. It lost three games in which it led or was tied in the fourth quarter, and seven in a row overall before snapping the skid with a 40-30 win over Callaway last week.

There have been some bright spots. Senior running back Cedric Phillips (1,181 yards and nine touchdowns) is the program’s first 1,000-yard rusher since 2011. Senior quarterback Sha’Kori Regan has thrown for more than 1,000 yards and rushed for more than 600, while receivers Keveon Smith and Deandre McCalpin have combined for nine touchdown receptions.

The Gators have also rushed for 536 yards and scored 73 points in their last two games. Hughes said building on those recent positives and finishing on a high note was a major goal this week.

“The mindset is improvement. The mindset is you get an opportunity to play the second-best team in the district. And even if it’s just for our mindset, we can get a lot of redemption just by having a good showing and playing this team well,” Hughes said. “If we come out playing, we can have a real good feeling about where we’re at and where we are going to be when we start things up next year.”

The Gators will also try to show they can play with opponents in the top half of the division. Neshoba Central and Ridgeland, which have clinched playoff berths, outscored Vicksburg 109-14. Holmes County Central is in that same class.

The Jaguars were widely considered a Class 5A championship contender entering the season, then suffered several key injuries and opened with back-to-back losses to Warren Central and Greenwood. They’ve won seven of eight since then — the only loss was a 27-20 defeat against Region 2-5A champion Neshoba Central on Sept. 27 — and are once again generating some buzz.

Quarterback Justin Smith has thrown for 1,991 yards and 29 TDs, but Hughes said the key to a potential upset on Friday would be slowing down the Jaguars’ running game. Smith has run for 415 yards and five touchdowns, and running back Reko Walden has 1,203 yards and 10 TDs.

Vicksburg has allowed nearly 200 rushing yards per game this season. Only one opponent, Provine, had less than 100.

“We’re going to have to figure out how to stop the run. In both of them (losses to Ridgeland and Neshoba Central), that was the thing. We turned the ball over a lot, which didn’t help matters, but the bottom line was we never had a chance to make it a game because we couldn’t get any stops,” Hughes said. “It’s something that we’ll have to do here, and we’ll have to play lights out on both sides of the ball. We’ve felt like we’ve been able to do that at times. Maybe it’s a quarter or a half. At some point in time you’ve got to put it together for four quarters, and we get an opportunity to do that against one of the top tier teams in our district.”

ONLINE:
For full coverage and updates on Friday night, follow us at vicksburgpost.com, facebook.com/thevicksburgpost, and twitter.com/vixpostsports