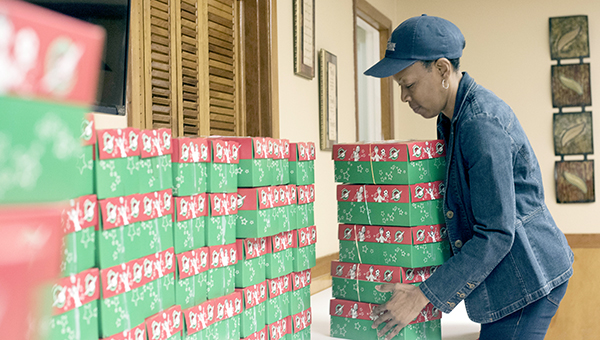 For thousands of children around the world Christmas will arrive in a shoebox.

Tiny gifts will be tucked inside, and for those receiving the presents, every item is treasured, as it might be the only things they will receive.

Pitts serves as the Operation Christmas Child director for Warren County. From Nov. 18-25 First Baptist Church, 1607 Cherry St., will serve as a collection center for anyone interested in filling a shoebox.

“A friend of mine, who used to live here, was doing this in Georgia and she told me about it, and I came home and presented it to the church,” she said.

That first year, Pitts said, there were about 125 boxes collected.

Twelve years ago, the church became a collection center for the shoeboxes, and last year 6,600 were collected from the area.

Pitts said while Operation Christmas Child has grown through the years, the outreach project is not just about a shoebox.

“This is about a child receiving a gift, many of whom have never received a gift before,” she said.

Several years ago, Pitts said she had the opportunity to hand out shoeboxes to children in the Andes Mountains in Peru.

“It was such an experience to see kids that had never received anything,” she said.

And unlike many other goods that are given to countries in need, shoeboxes are not handled through the government, which is a “good thing,” Pitts said.

“They are given to missionaries, teachers, pastors and Operation Christmas Child volunteers,” she said.

Pitts said any individual, group or organization can participate in Operation Christmas Child. All anyone has to do is fill a shoebox.

Standard size shoeboxes can be used as well as like-sized plastic containers. Gifts can be designated for girls or boys and for ages 2-to-4, 5-to-9 and 10-to-14.

Suggested items include small cars, balls, dolls, stuffed animals, harmonicas and yo-yos. School supplies are also welcomed, Pitts said, since some children are not allowed to attend school unless they have their own materials.

Hygiene items such as toothbrushes, soap, combs and washcloths are needed. However, toothpaste cannot be packed inside the box.

Shoeboxes can also include personal notes to the child, letters and photos from the giver.

Pitts said used items are not permitted, as well as toy guns, knives or other war-related items. Perishable food items, hard candy, liquids of any kind, medicines and breakable items are also not permitted.

After all the shoeboxes have been collected in Vicksburg, Pitts said they are then loaded onto an 18-wheeler and sent to Jackson.

“They then go to a processing center in Atlanta. Once in Atlanta, volunteers go through the boxes and take out inappropriate items,” she said.

Boxes can be wrapped, Pitts said, but the tops and bottoms must be done separately since they are opened and inspected before being sent to the children.

Brochures on how to pack a shoebox are also available at First Baptist.

Operation Christmas Child was started in 1993 and has become the world’s largest Christmas project of its kind.

Since its conception, more than 168 million gift-filled boxes have been collected and delivered to children in more than 160 countries.

To view a live interview from an Operation Christmas Child recipient, visit video.samaritanspurse.org/evangelines-story/.