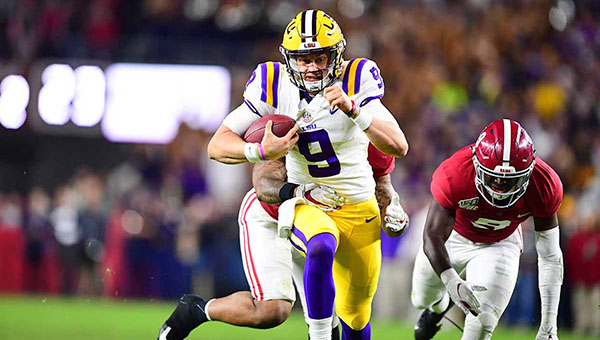 LSU quarterback Joe Burrow (9) runs with the football Saturday against Alabama. Burrow threw for 393 yards and three touchdowns, and ran for 64 yards to lead the Tigers to a 46-41 victory — their first over the Crimson Tide since 2011. (Brandon Gallego/LSU Athletics)

TUSCALOOSA, Ala. (AP) — Joe Burrrow sprinted toward the LSU fans to celebrate a monumental victory, and moments later was hoisted on the shoulders of two beefy teammates.

They carried him only partway across the field. The ride isn’t finished for Burrow and No. 1 LSU but the quarterback’s masterful performance Saturday in a 46-41 victory over nemesis and second-ranked Alabama marked a huge step toward the Tigers’ championship goals.

Burrow passed for 393 yards and three touchdowns, answered challenge after challenge and helped end the eight-year string of futility that started with the national title game in January 2012. Now, their sights are set on another shot at national and Southeastern Conference championships.

LSU coach Ed Orgeron said that for the first time he told his players pre-Alabama, “You’re the better team.”

The Tigers (9-0, 5-0 Southeastern Conference, No. 2 CFP) are no longer second fiddle in the SEC West, or maybe in the playoff rankings. And Burrow stamped himself as the Heisman Trophy front-runner with a gutty performance when he answered every challenge from ‘Bama.

And the challenges were plentiful. The Crimson Tide (8-1, 5-1, No. 3 CFP) rallied from a 33-13 halftime deficit to three times to pull within a touchdown in the fourth quarter. It kept going from game seemingly over to game on.

That came as no surprise to Burrow.

“I knew they were going to come back,” he said. “That’s Alabama on the other side, dynasty. I was really happy with the way we responded.”

The showdown lived up to its billing as a duel between two high-powered offenses and star quarterbacks with President Donald Trump attending. Tua Tagovailoa launched an 85-yard touchdown pass to DeVonta Smith with 1:21 left after the Tigers’ own scoring march, cutting it to 46-41.

Justin Jefferson recovered the onside kick and LSU ran out the clock, finally triumphant over their SEC West nemesis.

Burrow completed 31 of 39 passes. ran for 64 yards and was carried most of the way off the field by two teammates.

The ride isn’t over for LSU. Burrow said titles are what he was after when he transferred to LSU from Ohio State.

“We’re not done yet,” the two-year starter said. “It’s Game 9. We’ve got three more regular-season ones and the SEC championship. This was never our goal. We’ve got bigger goals than this.”

Clyde Edwards-Helaire ran for three touchdowns and caught a scoring pass, getting emotional on the sideline after a late touchdown that appeared once again to put the game away.

Tagovailoa, 20 days removed from ankle surgery, was 21-of-40 for 418 yards and four touchdowns with an interception and a fumble. He was called a “game-time decision” all week, looked shaky early and appeared to be limping after the game, but he kept Alabama in it.

Smith had 213 yards and a pair of touchdowns on seven catches for Alabama.

LSU outgained Alabama by a slender 559-541. The Tigers had scored just 39 combined points in the last five meetings, but this was an entirely different offense.