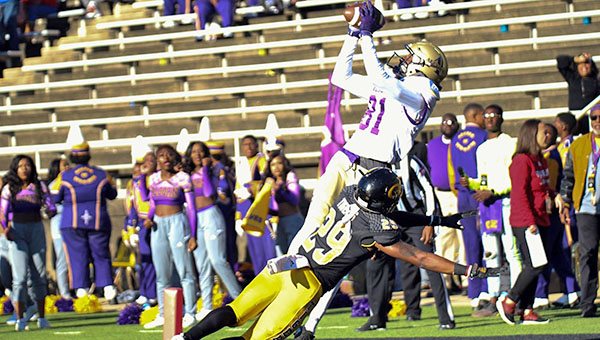 After Mendez’s field goal, the Braves (6-3, 4-1) drove to the 11 but got backed up to the 16 after a false start penalty on third-and-8. Corey McCullough missed a 33-yard field goal attempt that would have sent the game to a second overtime.

McCullough had made three field goals earlier in the game, but he missed the one in overtime and a 47-yard attempt as time expired in regulation.

“This was a tough loss for us against a tough Grambling team. I credit Grambling for making enough plays to win the ball game, and we obviously didn’t do enough,” Alcorn coach Fred McNair said. “We didn’t finish drives and we threw interceptions in the red zone. We couldn’t sustain drives and that cost us the ball game. We fought hard, but we gave up two touchdowns and there’s a lot of things that we need to clean-up. We have to be able to execute, but we didn’t do a good job of it today.”

Grambling (5-4, 3-2) went on an eight-play, 80-yard drive capped by Charles Wright’s 29-yard TD pass to Kobe’ Ross that tied the game at 16-all with 1:07 left in regulation. Mendez missed the extra point attempt.

Jordan Bentley, who finished with 132 yards on 25 carries, scored on a 7-yard run in the first minute of the fourth quarter and Marcus Cushine returned a fumble 53 yards to give Alabama A&M a 34-30 lead. But the Tigers rallied on Jalon Jones’ 8-yard pass to D.D. Bowie and Jones’ 51-yard run to lead 43-34.

The teams combined for 1,122 yards offense. Glass, the conference passing leader, was 25-of-40 for 410 yards. Freshman Abdul-Fatai Ibrahim made nine catches for a career-high 203 yards and two touchdowns.

Jones threw for three touchdowns for the Tigers. Keshawn Harper had 18 carries for 135 yards and Jones added 130 on 18 attempts.

Belhaven 25, Sul Ross State 6
Belhaven quarterback Hunter McEachern threw for one touchdown and ran for 74 yards, Brad Foley had 53 yards and a touchdown on the ground, and Belhaven (2-7, 2-6 American Southwest Conference) beat Sul Ross State (3-5, 3-4) for its first home win of the season.

Kip Vanhoose ran for 144 yards and a touchdown for Hendrix.

Amryn Jeffrey was 20-of-38 passing for 253 yards and three touchdowns for Millsaps, but threw two interceptions and was sacked twice.

Moise Tezzo caught five passes for 99 yards and one touchdown for the Majors, and Austin Russell caught six balls for 71 yards and two TDs. Mickale Massey led the defense with 16 total tackles, 4 1/2 tackles for loss, and 2 1/2 sacks.

McDaniels ran for a 2-yard touchdown and threw a 32-yard TD pass to Tyriq Martin in the third quarter to give West Alabama a 28-14 lead. Demetrius Battle added an 8-yard TD run in the opening minute of the fourth quarter to make it a 21-point lead.

Mississippi College ran for 190 yards as a team — Jaylin Jones had a team-high 60 and one touchdown on 13 carries — but quarterback Detric Hawthorn was just 3-of-15 passing for 117 yards.

Ruddick scored on a 30-yard run with 3:32 left in the fourth quarter, and Marvin Terry sealed the win with an 8-yard fumble return touchdown in the final minute.