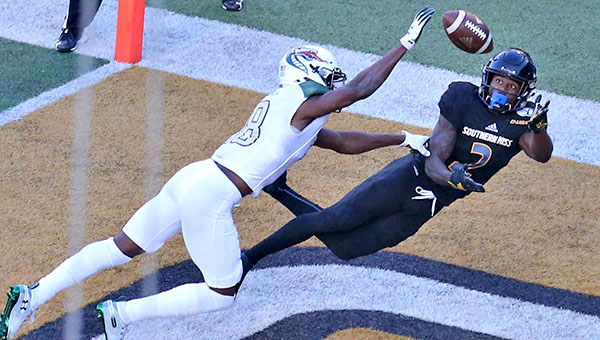 It was the 600th win in 103 years of football for Southern Miss (6-3, 4-1 Conference USA), which also became bowl eligible for the fifth straight season and kept alive its C-USA West Division championship hopes.

It is the earliest calendar date (Nov. 9) as well as the earliest in the schedule (ninth game) Southern Miss has gained postseason eligibility in head coach Jay Hopson’s four seasons.

Stein’s third field goal in the third quarter put the Golden Eagles on top 23-2 before Jack Abraham had a pair of touchdown passes — for 20 yards to Quez Watkins and 9 to Tim Jones.

Abraham was 17-of-22 passing for 164 yards. With Kevin Perkins picking up 94 yards on just six carries, Southern Miss piled up 325 total yards. UAB was leading the league in allowing just 255 yards, 92 on the ground.

A first-quarter interception by Shannon Showers led to a 6-yard touchdown run by Steve Anderson in the first quarter. Thomas followed up Stein’s first field goal with his pick-six early in the second.

Stein kicked a 44-yard field goal on the last play of the first half for a 20-2 lead.

UAB (6-3, 3-2) only had 173 yards on offense. The only points the Blazers managed came on a third-quarter sack of Abraham in the end zone, with offensive lineman Drake Dorbeck — a former St. Aloysius star — swatting the fumble through the back of the end zone.

Southern Miss snapped a three-game losing streak against UAB, and beat the Blazers at home for the first time since 2008.